Tracking The Solstice Storm (345 months in a row and counting) 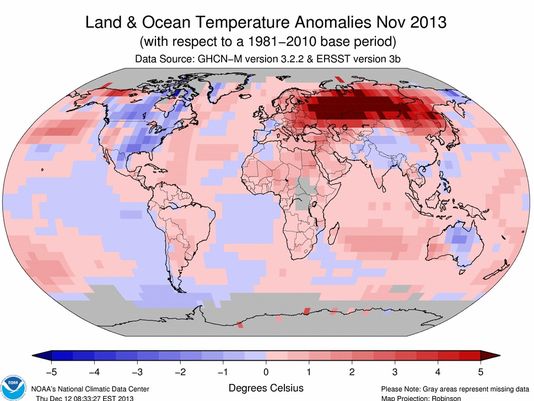 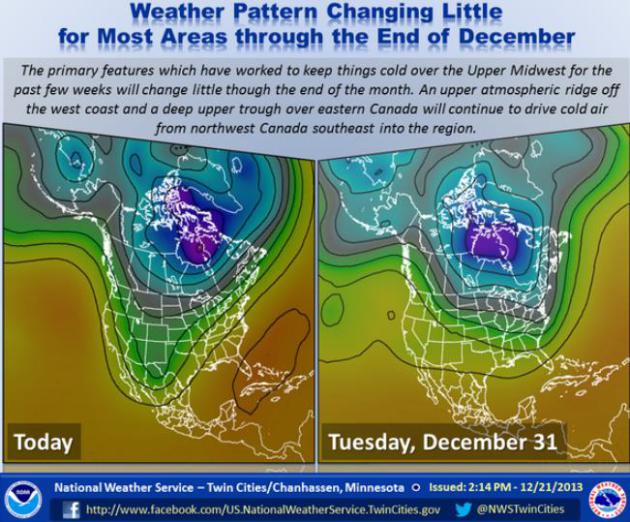 Status Quo. No major shift in the pattern is likely looking out 2 weeks, dominated by a series of Alberta Clippers swept up in a harsh, northwest wind flow aloft. That will mean occasional bursts of snow (couple inches of fluff) and temperatures averaging well below normal into at least the first few days of 2014. Graphic above: Twin Cities National Weather Service. 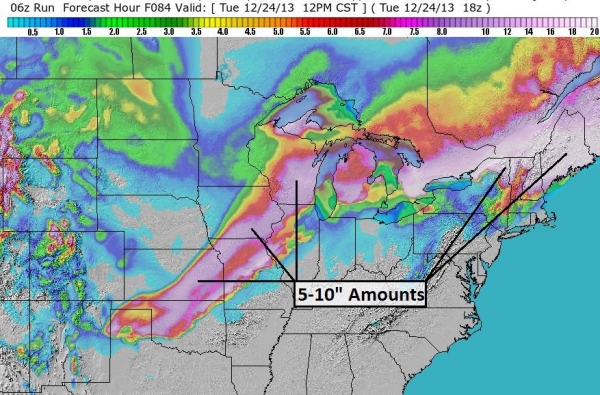 Heavy Snow Potential. Models continue to show a plume of significant, plowable snow extending from northern Oklahoma into central and northern Missouri, southern and eastern Iowa, far northwest Illinois and the southeastern half of Wisconsin. By late Sunday northern New England will see not only a dangerous layer of ice, but heavy snow as well.

Severe Icing. Models show a .25″ layer of glaze ice over southeast Kansas and much of central Missouri and western Illinois, where some power outages are possible. Significant icing is also expected over Lower Michigan, near Lansing and Ann Arbor (staying just northwest of Detroit). The most extreme icing is forecast for far northern New York State and much of Maine, where power outages may be even more widespread by late in the weekend. 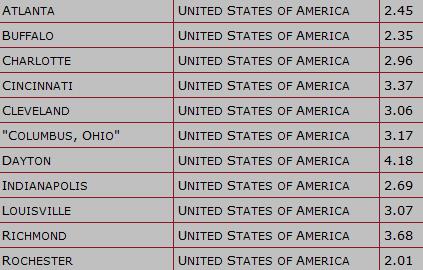 Problematic Rains. In the summer 2-4″ of rain wouldn’t cause nearly as many headaches, but the fact that the ground is frozen means heavy rain falling on the Ohio River Valley will almost immediately run off into streets, streams and basements. The metro areas above may see significant flash flooding over the next 24-36 hours. 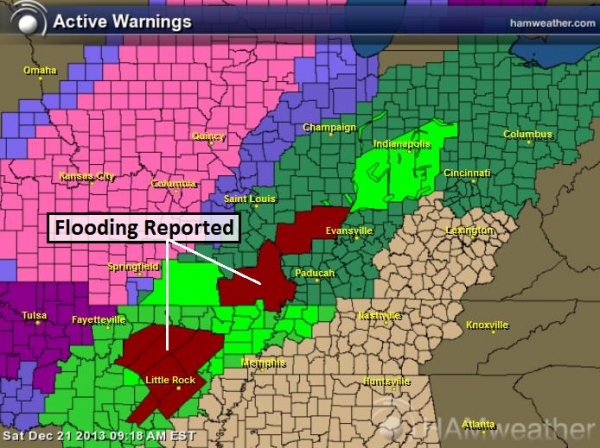 Flooding Underway. Flash Flood Warnings are in effect for the Little Rock market, and much of far western Kentucky and southern Illinois. I expect similar warnings to be issued from Memphis and Nashville to Louisville, Indianapolis and Columbus. 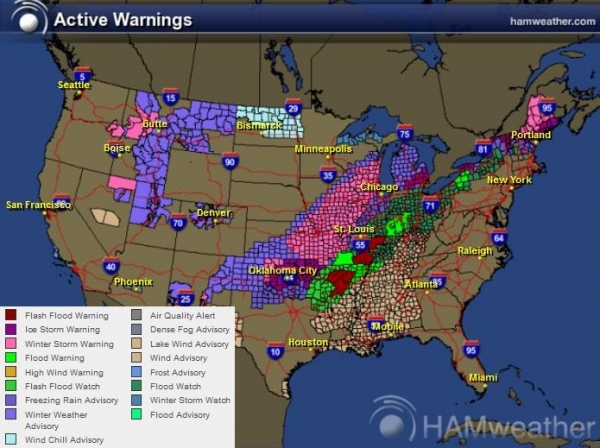 National Warnings. The USA map is lit up like a (bad) Christmas Tree this morning, Ice Storm Warnings for Oklahoma City and Tulsa, Winter Storm Warnings extending all the way into Wisconsin and far northern Maine. Flash Flood Watches & Warnings are posted from northeast Texas into upstate New York for rapid run-off as heavy rain falls on frozen ground.

Summary: Power outages from glaze ice are likely from Oklahoma City and Tulsa into central Missouri, western Illinois and southern Michigan, with a potential for major icing over far northern New York State and northern New England. Heavy snow will disrupt travel by land and air from eastern Kansas into eastern Iowa and much of Wisconsin over the next 36 hours. America experiences more extreme weather than any nation on Earth. Today will be a poignant, ill-timed reminder of that fact. The Winter Solstice Storm of 2013 will impact as many as 75 million Americans between now and Sunday night. Good luck. 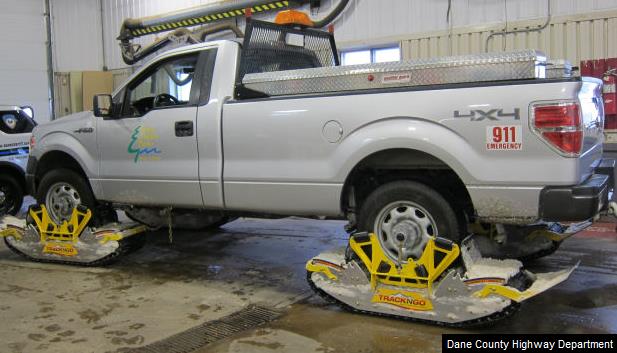 “Blizzard-Busting” Equipment To The Rescue. Check out what they’re doing in the Madison, Wisconsin area to make vehicles more storm-worthy – pretty cool. Here’s a clip from madison.com: “Dane County trucks will be making tracks to stranded motorists or residents this winter, thanks to new “blizzard-busting” equipment. The new equipment, which is a track system attached to the tires of a standard off-road pickup truck, was rolled out Friday by highway officials. “With extreme winter weather becoming the norm, we are upgrading our technology to help keep residents safe,” said Dane County Executive Joe Parisi in a prepared statement…”

Photo credit above: “This Dane County Parks Division off-road pickup has been had a track system attached to its tires to help reach snowed-in destinations during winter storms.” 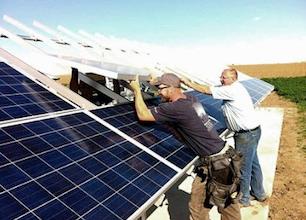 Move Over Wind? Solar Energy Market “Exploding” In Iowa. Midwest Energy News and GreenTech Media has the story – here’s an excerpt: “Iowa is well established as a national leader in wind energy and biofuels. Now the state is poised for serious growth in solar as well. “The market is exploding in Iowa,” says Tim Dwight, a former Iowa Hawkeye and NFL star who has become one of his home state’s most visible solar energy advocates. Homeowners, farmers, businesses and at least one school district in Iowa are going solar. Also, over the past year, several municipal utilities and rural electric co-ops have put up solar arrays, inviting customers to buy a share of the power generated….” 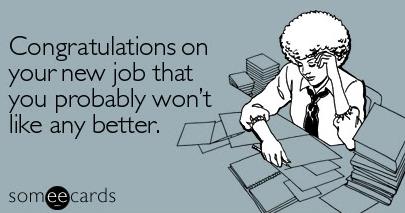 How To Find Fulfilling Work. Do what you love and the money will come! Easier said than done. Maria Popova has an interesting perspective in Brain Pickings; here’s a clip: ““If one wanted to crush and destroy a man entirely, to mete out to him the most terrible punishment,” wrote Dostoevsky, “all one would have to do would be to make him do work that was completely and utterly devoid of usefulness and meaning.” Indeed, the quest toavoid work and make a living of doing what you love is a constant conundrum of modern life…” 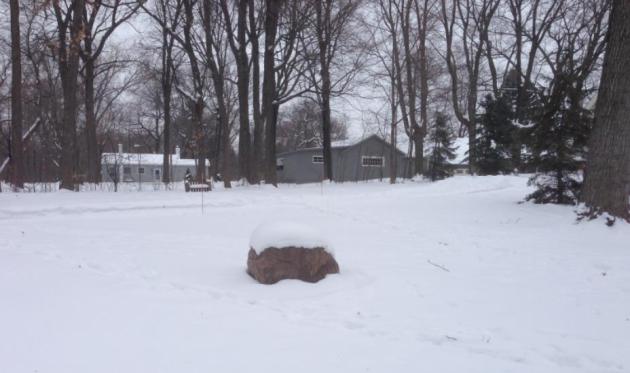