Tropics Update: Development Possible in the Gulf of Mexico
Severe Storms in the Plains & Midwest through Sunday
Summer Heat From the SE to the NW
Heavy Rain & Strong Storms for Florida this Weekend
Rainy Pattern Sticks Around in the Southwest
Monsoon Storms Spark New Fires
All Weather News

I wish I could see your face as you read this. Maybe it’s best I can’t. Grin? Or grimace? High five – or a stream of spank-worthy expletives? March snows are a Rorschach test for Northerners. Many find them annoying; I look at the maps and get encouraged.

Why? Last March brought 70s and 80s; the warmest March on record was an omen for record heat & drought later that summer.

Not so in 2013. A parade of storms into spring is required to pull us out of a potentially debilitating drought. Think of this as cold, white Manna from Heaven. Theoretically possible, until you get into your car.

We should have 4 to 5 inches of wet snow by tonight, another 2-4 inches early Tuesday. Plowable, but hardly crippling. Leave extra time, extra space on the freeways, and please tip your waiter.

Chicago picks up 8 inches, maybe 4-8 inches in Washington D.C. – which qualifies as a natural disaster. Mother Nature is about to sequester members of Congress.

We thaw out later this week; more sloppy snow brewing 1 week from today.

Most of this delightful, concrete-like slush will run off before it can soak into dusty topsoil. But some pain on the freeways now means drought may be easing. 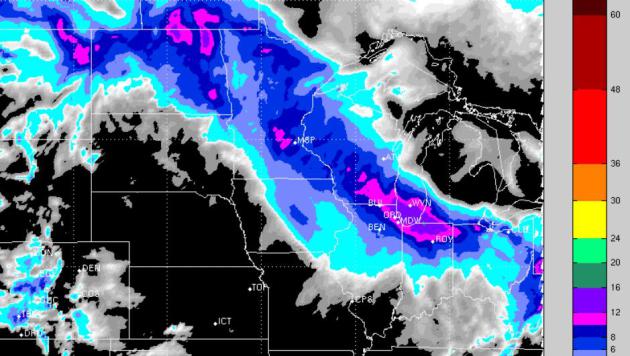 A Respectable Pile of White. WSI Corporation’s 12 km. RPM model prints out some 10″ snow amounts just west of the metro area, a 150-200 mile wide band of at least 6″ of snow, closer to 8″+ for much of central, east central and southeastern Minnesota and a vast swath of Wisconsin. As much as 12-16″ snow is possible from Madison and Milwaukee to Chicago and South Bend, Indiana. Great fun! Especially at O’Hare and Midway. This will be a good 48 hour period to take Amtrak.

One Beefy Clipper. You’re picturing a plus-size barber? Who writes this crap? Oh, I do. Sorry. What this Alberta Clipper lacks in moisture it will make up for in speed, or I should say a lack of speed. This system is limping along, and a 36+ period of snow will result in plowable snowfall amounts from Minnesota into Wisconsin, northern Illinois and Indiana and the Detroit area. Washington D.C. may pick up as much as 5-10″ Wednesday, with a foot for the far northern/western suburbs. Looks like Old Man Winter is about to sequester our nation’s capitol. 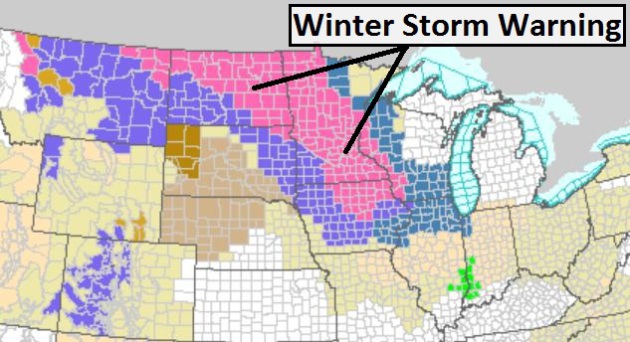 The Best Clipping In Years. NOAA has issued Winter Storm Warnings from much of North Dakota into a big stretch of Minnesota, western Wisconsin and northern Iowa, meaning heavy snow and treacherous travel is imminent. Details:

Sputtering Along. A typical Alberta Clipper moves at 20-35 mph, leaving little time for snow to accumulate, in fact most clippers just whip up gusty winds which kick around the snow that’s already on the ground. But this system is limping along at 10-15 mph, meaning a much longer period of snow from the Upper Midwest into the Great Lakes; eventually regenerating into a coastal storm capable of dumping 5-10″ or more on Washington D.C. New York City may be spared, with only an inch or two by Thursday, but it will be a very close call. 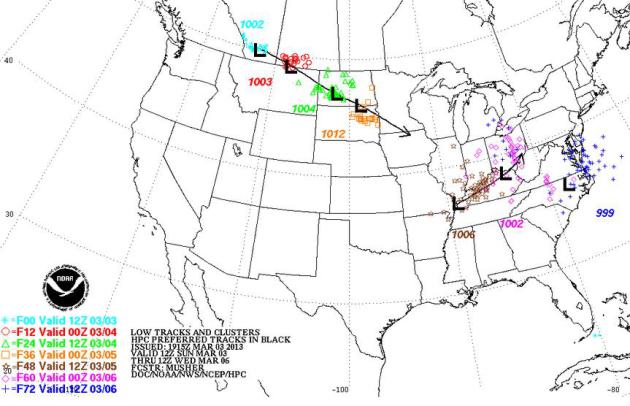 Storm Track. You can see the various models and their predictions of where/when the Alberta Clipper will be centered looking out 72 hours. The heaviest snowfall amounts are likely just north of the storm track. Map: NOAA. 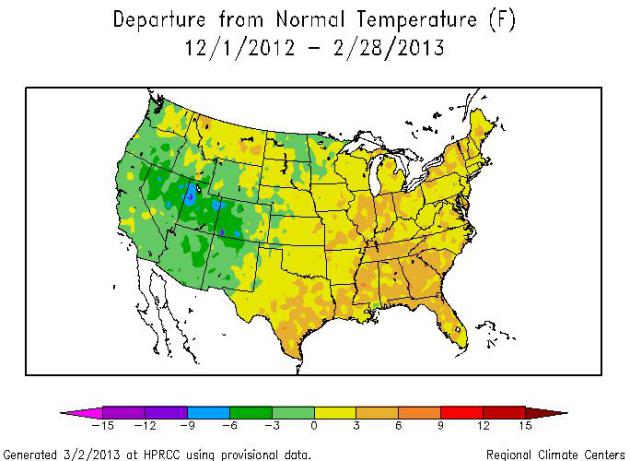 A Rough Winter? Not So Much. NOAA’s Regional Climate Center shows a warmer than average winter east of the Rockies; temperatures as much as 3F warmer than normal from the Midwest into the Southeast. The western third of the USA has been trending colder since December 1.

More on Climate and Weather News: 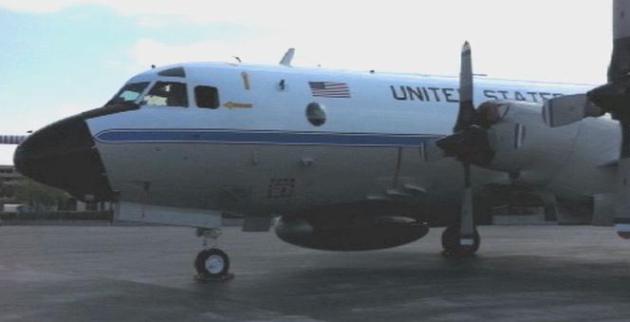 How The Sequester Impacts Weather And Hurricane Reporting. Here’s a story that caught my eye; an excerpt courtesy of Central Florida News 13: “How you are protected and receive information about extreme weather conditions from the government could be affected by the sequester. The National Oceanic and Atmospheric Administration, which runs the National Weather Service and the National Hurricane Center, stands to take a large hit if the sequester takes effect, according to the Obama administration. The Department of Commerce, oversees NOAA, stated that the budge cuts could potentially impact the public in a storm. In an emailed statement, a spokesman wrote:

“These cuts would result in a gap in weather satellite coverage, diminishing the quality of weather forecasts and the warnings of severe weather events like hurricanes and tornadoes…These impacts directly affect NOAA employees and partners throughout the country: up to 2,600 NOAA employees would have to be furloughed, approximately 2,700 positions would not be filled, and the number of contractors would have to be reduced by about 1,400. If sequestration is enacted, NOAA will face the loss of highly trained technical staff and partners. As a result, the government runs the risk of significantly increasing forecast error and, the government’s ability to warn Americans across the country about high impact weather events, such as hurricanes and tornadoes, will be compromised..”.

Photo credit above: “(FILE/Kimberly Prosser, Brevard County Emergency Management) “Hurricane hunter aircraft like this one in Brevard County could be forced to reduce flight hours under budget cuts as outlined in the March 1, 2013 sequester.” 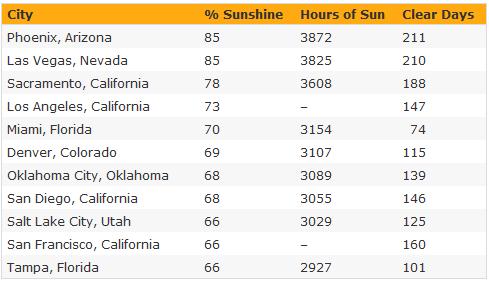 Percentage Annual Sunshine. The list above highlights America’s sunniest cities. Phoenix and Las Vegas get top honors for the most sunshine (85% of daylight hours are sunny, on average). As a point of comparison 58% of daylight hours in the Twin Cities are clear to partly cloudy, a higher number than Chicago, Milwaukee, Detroit or Boston. Source: currentresults.com.

2012 U.S. Extreme Weather Overview. Here’s a portion of an excellent recap and summary (PDF) of America’s weather extremes during 2012 from Climate Nexus: “With oppressive heat waves, devastating droughts, ravaging wildfires, and hard-­hitting storms, 2012 was one for the record books. Thousands of precipitation and temperature records were broken, plaguing almost all of the United States this year and underscoring the connection between increasingly frequent and intense extreme weather and climate change. With climate change, we’ve set the table for precisely this kind of extreme weather, and unfortunately, our changing climate threatens to alter the weather for years to come.


A year of extremes: 2012 was the second most extreme year on record for the nation, according to the U.S.Climate Extremes Index. The year had 11 disasters costing $1 billion or more. The only year on record that had more billion dollar disasters was 2011, which had 14. According to Munich Re, extreme weather caused $107.2 billion worth of damage in the U.S in 2012….” 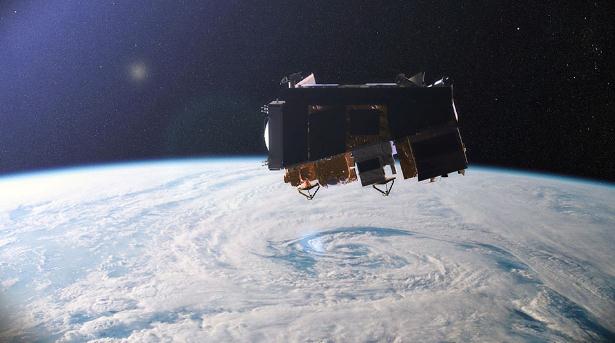 Image credit above: “Suomi NPP is a weather satellite in low-Earth orbit—the only one the U.S. currently operates for civilian uses.”

Every day I sift through hundreds of stories, maps, graphics and meteorological web sites, trying to capture some of the most interesting weather nuggets, the stories behind the forecast. I’ll link to stories and share some of the web sites I use. I’m still passionate about the weather, have been ever since Tropical Storm Agnes flooded my home in Lancaster, PA in 1972. I’ve started 5 weather-related companies. “EarthWatch” created the world’s first 3-D weather graphics for TV stations – Steven Spielberg used our software in “Jurassic Park” and “Twister”. My last company, “Digital Cyclone”, personalized weather for cell phones. “My-Cast” was launched in 2001 and is still going strong on iPhone, Android and Blackberry. I sold DCI to Garmin in 2007 so I could focus on my latest venture: WeatherNation.

One response to ““Very Plowable” Snow as Clipper Hits the Midwest”