Watching Another Northeast Storm For After Election Day 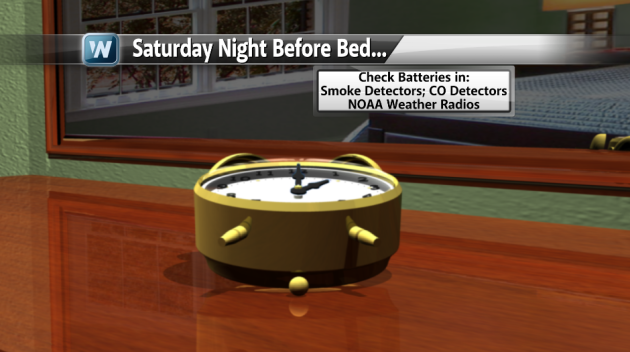 Good Sunday to everyone out there! Hope you remembered to set your clocks back one hour before you went to bed last night! It is also a good reminder to check your batteries in smoke and CO detectors, as well  as your NOAA Weather Radio. 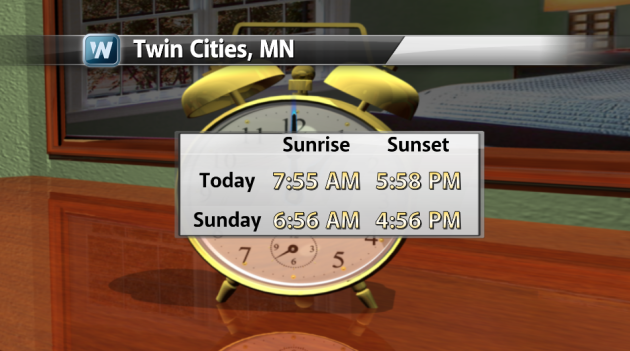 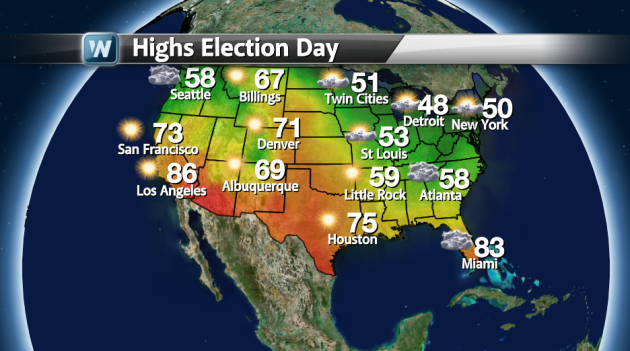 Looking nationwide for Election Day, relatively nice weather will dominate. The only areas we will have to watch for rainy weather is in the northwest, parts of Minnesota and Wisconsin, as well as the southeast. The southeast activity will be associated with a possible Nor’Easter as we work into Wednesday and Thursday hitting the same areas that Sandy just went through. 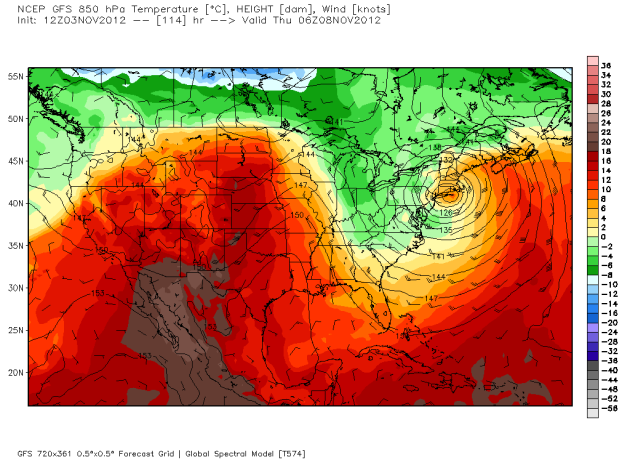 A warming trend will be dominate from the Mississippi River eastward. This 850 mb temperature output for early Thursday shows the possible nor’easter on the east coast, as well as some warmer temperatures aloft moving into the Midwest. This should bring temperatures into the upper 40s and 50s into the upper Midwest. Model image via WeatherBell Models. 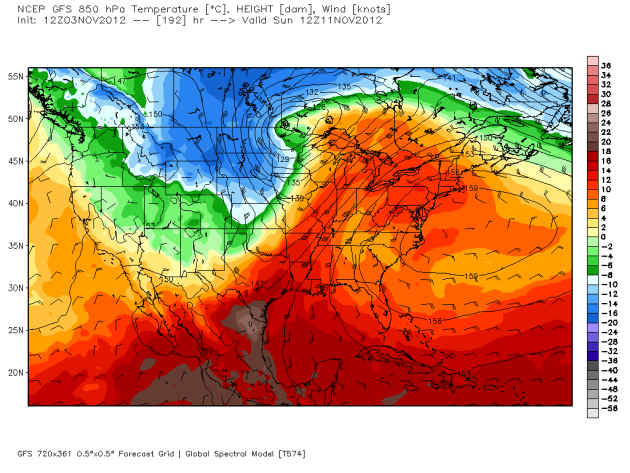 Unfortunately the warmth doesn’t last, however, as the next system comes into the upper Midwest late next weekend, bringing the possibility of rain (and perhaps some snow) with it. It’s a week out, and things can change, however winter has to come at some point… Way too early to be getting our hopes up on this system though! Model image via WeatherBell Models. 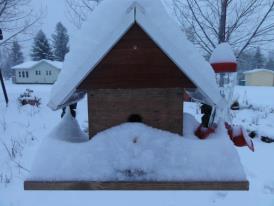 Just a reminder of what is supposed to happen in winter… snow! Parts of North Dakota saw 6″ + on Friday, including the Walhalla, ND area. Photo above via the Frost Fire Ski and Snowboard Area. 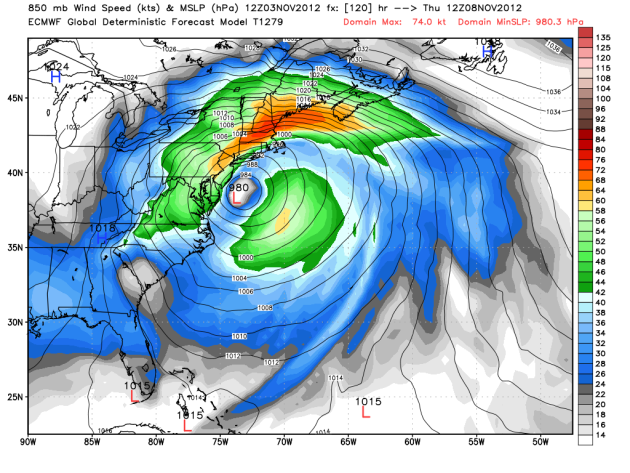 As each model run comes in, there is much more confidence in the possibility of a storm mid-to-late week in the northeast. This shows the 12z ECMWF run from Saturday, showing a strong system off the coast of New Jersey coast Thursday Morning. Definitely not a welcome site to those recovery from Sandy.  Model image via WeatherBell Models. 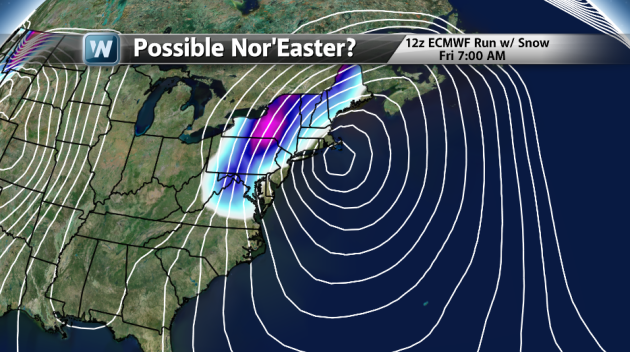 This is another shot of the 12z ECMWF run from Saturday, showing the system off the coast of Cape Cod Friday Morning, along with forecasted snowfall. Some areas in Pennsylvania and New York could see up to a foot of snow if predictions by this model are correct — welcome site to ski resorts, but definitely not welcome to those trying to recover from Sandy, as some of the hardest hit areas could see rain and even some snow from this system. 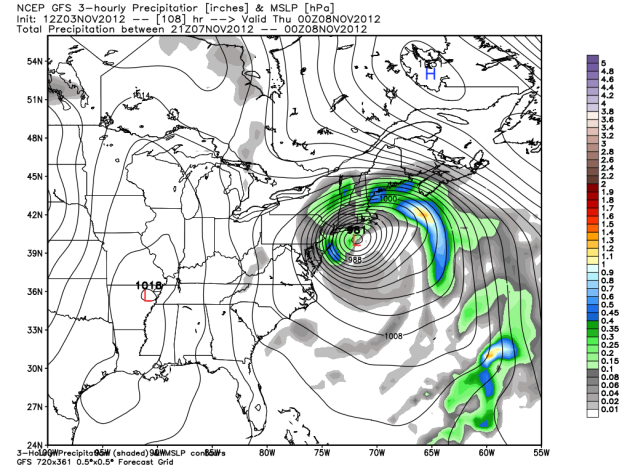 This is the GFS run from 12z on Saturday, showing an even stronger storm than the ECMWF coming onshore near East Hampton or Montauk late Thursday or early Friday. From there the storm moves into Connecticut and Rhode Island. Model image via WeatherBell Models. 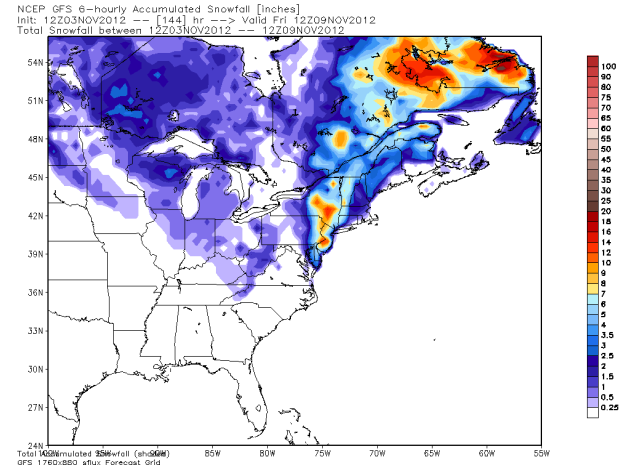 The GFS is outputting between a half a foot and a foot of snow in parts of Jersey and southeast New York from this next system. Model image via WeatherBell Models.

We’ll keep an eye on the system for the northeast. Have a great Sunday, and enjoy the weather!