What Phobia Keeps You Up At Night?

With today’s supermoon (passing closer to Earth than anytime since 1948) my Amablephobia is acting up. That’s an irrational fear of looking up, or the sky falling. Then again a close encounter with the moon or a sudden alien invasion may be one of the few things capable of uniting us right now.

As many as 1 in 10 Americans may suffer from intense fear of weather, debilitating phobias that can impact quality of life. After breaking my ankle walking the dog last winter (please don’t laugh) I now suffer from Pagophobia, a fear of ice. Which is ironic, since I also have serious concerns about runaway warming, or Kalimeraphobia.

If you suffer from Chinonophobia (fear of snow) or Ancraophobia (fear of wind) it’s almost time to head for the bunker. The mild pattern is showing signs of breaking down; a big storm spins up across the Plains states later this week – cold exhaust on the backside of this storm changing rain over to heavy wet snow. On our patented (not really) snowstorm rating scale from nuisance to plowable to crippling, this could be somewhere between plowable and crippling for much of Montana, the Dakotas and far northwestern Minnesota by Friday and early Saturday. We’re due for some accumulating snow by mid-November – this is hardly shocking news.

It’s been the warmest start to November on record for much of the USA. We’re due for a minor reality check.

Not frigid but definitely colder in time for Thanksgiving.

It’s still a little early to try to get specific with timing and amounts, but the storm forecast to spin up later this week is predicted to drop some 1-2 foot snowfall amounts from the Black Hills of South Dakota into North Dakota, possibly the Red River Valley, based on GFS guidance.

Looking out roughly 2 weeks the 500mb flow is forecast to kink up into a weak Omega Block; storms favored for the western USA and New England with weak ridging over the Plains. A seasonably chilly pattern for northern tier states; uncomfortably cold for New England.

Most (but not all) La Nina cooling phases in the Pacific result in drier winters for the southern USA. Here’s an excerpt from Climate Central: “La Niña is here. But unlike the El Niño that preceded it, this climate event is expected to be weak and short-lived, the National Oceanic and Atmospheric Administration said Thursday. But that doesn’t mean the U.S. won’t see some of the typical impacts of a La Niña; forecasters expect it to tilt the odds in favor of warmer, drier conditions across the already drought-stricken southern portions of the country and wetter, cooler conditions across some of the northern regions. “The weak La Niña is likely to contribute to persisting or developing drought across much of the southern U.S. this winter,” Mike Halpert, deputy director of NOAA’s Climate Prediction Center, said in a statement...”

In light of the major tremor and tsunami that impacted New Zealand I thought it might be a good idea to provide some perspective for the USA. The threat varies, based on a variety of factors, but the west coast is most threatened. Here’s an excerpt from the National Tsunami Hazard Mitigation Program: “…The West Coast states of Washington, Oregon, and California have experienced tsunamis from as far away as Alaska, South America, Japan, and Russia. The most damaging on record is the tsunami caused by the 1964 Great Alaska earthquake. More recently, harbors in the region were damaged by events in Japan (2011) and Chile (2010). Other tsunamis in the region were produced by local earthquakes and landslides (both underwater and from land). Locally, the greatest threat is from the Cascadia subduction zone, which stretches from northern California to southern Canada. Large Cascadia earthquakes occur every 500 years, on average. According to geological data in the Pacific Northwest, the last great Cascadia earthquake occurred in 1700. It produced a tsunami that crossed the Pacific Ocean and caused damage and deaths in Japan. The next Cascadia event will significantly impact the region and the nation…”

At some point a weak to moderate La Nina phase of ENSO may cool things down, but I’m still struck by how much warm air there is, especially across Canada and the Arctic, where temperatures today are forecast to be 6-8F warmer than average. Temperature anomaly valid midday today courtesy of Climate Reanalyzer. 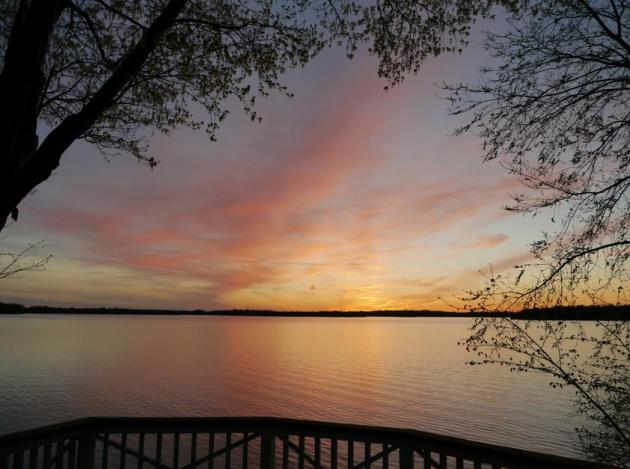 Here’s an interesting nugget from CNN and ourquadcities.com: “Severe weather is often associated with spring, but fall is a second deadly season for tornadoes, especially for Gulf Coast states. There hasn’t been a single tornado to date this month in the country. Last year 99 tornadoes occurred in November. On average, the month sees 58 tornadoes, most occurring in Texas, which averages nine in November…”

Why Extreme Weather Is The New Normal

Here’s the intro to a story at theweek.com: “This year, the U.S. has had 12 billion-dollar disaster events — floods, wildfires, hurricanes, severe storms, and droughts that each caused more than $1 billion worth of damage. Adjusted for inflation, there were on average only about two such events a year in the 1980s, five a year in the 1990s and 2000s, and almost 11 a year between 2010 and 2015. The flooding in Louisiana in August was the country’s eighth “once-in-every-500-years” weather event in a little over 12 months. Wildfires in California and other parts of the West grew at a rate of 90,000 acres a year between 1984 and 2011; in Alaska, four of the 10 worst fire seasons on record have occurred since 2004. The U.N. has calculated that the number of severe storms, floods, and heat waves worldwide is five times greater than it was in 1970; the World Bank estimates that extreme weather today affects 170 million people a year, up from 60 million three decades ago…”

Weather Photo of the Week

Check out this haboob, triggered by thunderstorm downdrafts kicking up a wall of windblown sand and dust. More details via Capital Weather Gang.

If you’re an astronomy buff it’s not too early to plan ahead for next August. Here’s an excerpt from EarthSky: “The foremost criterion for selecting a site is the weather. Any location along the path of totality from Oregon to South Carolina can enjoy good weather on eclipse day, but the western half of the United States, especially from the Willamette Valley of Oregon to the Nebraska Sandhills, will enjoy the very best weather odds. You can watch the weather forecasts starting a week before eclipse day to judge whether you can strike for a spot close to home or drive further afield. Wherever you go, every eclipse viewer should have a plan for mobility. Even in the sunniest locations, you don’t want to be caught under a cloud during the precious two minutes of totality….”
Image credit via GreatAmericanEclipse.com

NatGeo Exhibit Reminds Us: We Live In a Beautiful World

Here’s a link at story excerpt from The Washington Post: “… “National Geographic has always been about education and science and inspiring people to care, and Instagram has allowed us to do that even better.” Starting Friday, you can experience the Instagram account in a whole new way — by winding through a maze of cubes printed with images from the feed at the National Geographic Museum. The exhibit, “@NATGEO: The Most Popular Instagram Photos,” part of FotoWeekDC 2016, aims to mimic the online experience of Instagram in the real world, says curator Alan Parente. “Once you are on the app and you start exploring, you sort of get lost — moving from photos of walruses to ice climbers to a beach in Italy,” Parente says, explaining why the maze design seemed fitting for the exhibit…” (Image credit: Ami Vitale/National Geographic).

Big Question on Climate Crisis: How to Inspire Innovation

The solutions to make us more resilient, relying on less carbon to fuel the economy and our daily lives, will come from thousands of new companies focused on solutions. How best to turn up the dial on reinvention? Here’s a clip from The New York Times: “…Around the world, energy innovation seems to be speeding up. Large historical forces are converging to create unprecedented turmoil and opportunity in what had long been one of the most hidebound industries. The changes are coming just as governments have finally resolved, after two decades of failed efforts, to tackle the global climate crisis. The emissions that cause global warming have already fallen in some of the biggest countries, including the United States. Yet none of it is happening fast enough. Experts say that to forestall the worst effects of global warming, emissions need to drop by 80 percent or more globally by 2050, a mere 34 years from now...”

Inverse has the story; here’s the introduction: “When Donald Trump was announced as the next U.S. president, it likely meant the end of the United State’s leadership role in the global fight against climate change. As a result, we could see the rise of a new country leading the fight against climate change: China. China has been working diligently with the Obama administration during its final days to make headway following the 2015 Paris Climate Agreement. The United States and China are two of the world’s biggest polluters and when the two countries decided to team up, it helped to spur the agreement that is currently supported by nearly 200 countries...”

Photo credit: “China has been working to reduce the smoggy conditions that plague Beijing.”

This Year The Antarctic Has Suddenly Started to Disappear

Co.Exist has the story; here’s the intro: “The Arctic is melting. We know that already. But now we’re in worse trouble, because the Antarctic is disappearing too. By studying 36 years of satellite images, researchers have spotted the worrying trend. Until now, they thought that the Antarctic ice sheet was actually growing, but that has changed. The Arctic consists of a sea surrounded by land, and this stops its ice from drifting away every summer. The Antarctic is the opposite—land surrounded by water—so most of it melts every year. But every winter it refreezes, covering almost 7 million square miles with sea ice…” (File image: NASA).

Here’s an excerpt from The Houston Chronicle: “Two days after Donald Trump won the White House, Exxon Mobil official Suzanne McCarron made clear the oil giant’s position on climate change. In a tweet Thursday, she wrote, “The Paris agreement is an important step forward by governments in addressing the serious risks of #ClimateChange.” Trump made waves on the campaign trail vowing to “cancel” U.S. involvement in the pact, which was agreed to by close to 200 world leaders in Paris almost 12 months ago. And since Trump’s victory in Tuesday’s election, Republicans have cheered a quick end for President Barack Obama’s efforts to reduce greenhouse gas emissions. But it doesn’t look like Exxon Mobil, a steady GOP donor, is on board…”

Here’s an excerpt from an analysis at Science Magazine: “…Despite the vulnerability of many of his own properties to sea level rise, on the campaign trail President-elect Donald Trump stuck with Republican orthodoxy in questioning human-driven climate change, and criticizing the steps the Obama administration has taken to combat it. Trump has promised to “cancel” the Paris agreement, the recently adopted global deal to curb global warming, and to curb climate regulations from the Environmental Protection Agency (EPA), including the Clean Power Plan to cut emissions from coal-fired power plants, during his first 100 days in office…”