15 Apr 2013, 5:37 am
Share:
Weather Whipsaw
The question comes up frequently, and it’s a good one. “How could this winter be so radically different than last?” Polar opposites. But we’ve been living thru some amazing extremes in recent years: 145 tornadoes in Minnesota in 2010 (most in the USA), a 7 month flood on the Missouri River in 2011, followed one year later by the warmest year on record and the worst drought since the mid-50s. One extreme to the next.
A warmer, wetter atmosphere worldwide is flavoring all weather now, allowing weather to get “stuck”: longer, deeper drought, floods, record heat, even prolonged chill and snow.
A 2012 paper published at Cornell links record Arctic melting last fall with changes in the “polar vortex”, reducing the winds that swirl around the North Pole. “What goes on in the Arctic remotely forces our weather patterns here” said Dr. Charles Green.
The Arctic is the canary in the coal mine – a 75% drop in ice volume in 40 years may be having a domino effect at more southerly latitudes, including the northern tier of the USA this “spring”.
“What’s happening now is that we are changing the climate system, especially in the Arctic, and that’s increasing the odds for the negative “AO” (Arctic Oscillation) conditions that favor cold air invasions and severe winter weather outbreaks.”
Global warming implies steady warming, worldwide. Global Weirding better describes what we are seeing.
The next storm soaks us with rain Wednesday, maybe ending as wet snow Thursday, but not as much drama as last week.
50s return next week; a few 60s last week of April. Hurry up spring.

The Winters Of Our Discontent: Loss of Arctic Sea Ice Is Stacking The Deck In Favor Of Harsh Winter Weather In The U.S. And Europe. Here’s an excerpt/description of the Greene/Monger Cornell paper referenced above at Scientific American: “The past three winters in parts of North America and Europe were unusual. First, during the winters of 2009–2011, the eastern seaboard of the U.S. and western and northern Europe endured a series of exceptionally cold and snowy storms—including the February 2010 “snowmageddon” storm in Washington, D.C., that shut down the federal government for nearly a week. Later that year, in October, the NOAA Climate Prediction Center (CPC) forecasted a mild 2010–2011 winter for the eastern U.S., based on a La Niña pattern of cooler than usual ocean temperatures in the eastern Pacific. But even with La Niña’s moderating effects, very low temperatures and record snowfalls hit New York City and Philadelphia in January 2011, catching the CPC and other forecasters by surprise. More details on his research:

Polar Amplification. Hey, I expect you to be skeptical. Changes in the Arctic having an impact on the lower 48? It does sound a bit outrageous, but there’s sound science to back up that theory. Peter Sinclair’s Science Crocks has more details on the paper referenced above – more details on  “polar amplification”: “…A warmer Earth increases the melting of sea ice during summer, exposing more dark ocean water to incoming sunlight. This causes increased absorption of solar radiation and excess summertime heating of the ocean — further accelerating the ice melt. The excess heat is released to the atmosphere, especially during the autumn, decreasing the temperature and atmospheric pressure gradients between the Arctic and middle latitudes. A diminished latitudinal pressure gradient is linked to a weakening of the winds associated with the polar vortex and jet stream. Since the polar vortex normally retains the cold Arctic air masses up above the Arctic Circle, its weakening allows the cold air to invade lower latitudes…”Graphic above: This winter has seen a very negative phase of the AO, as low as -5, meaning unusually weak westerlies at far northern latitudes, allowing polar air to become entrenched over Canada and the northern USA. Last winter: a strongly positive phase; meaning strong west to east winds, keeping the coldest air of winter well north of Minnesota. What changed from year to year? Record melting of the Arctic in September, 2012. Graphic: Greene/Scientific American. 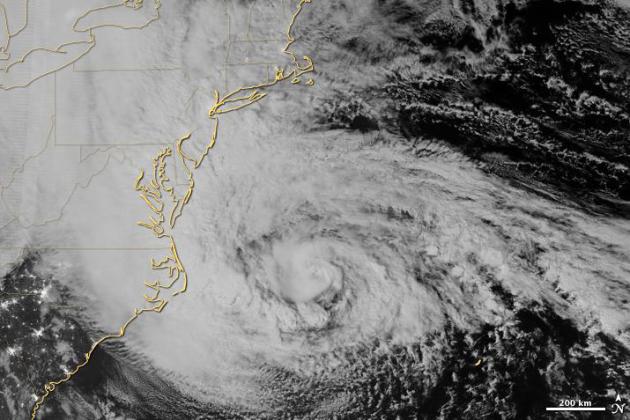 Arctic Oscillation. After being strongly negative since early February, reaching a low point the latter half of March, the AO or Arctic Oscillation if forecast to go positive by the third/fourth week of April, meaning stronger west to east winds aloft, which could just thaw out the northern USA a bit. Finally. Graph: NOAA.

No Shortage Of Storms. As mentioned up top, the pattern is a 180 degree opposite of what we were faced with much of 2012, when the jet stream bulged north into Canada, taking most of the moisture (and severe weather) with it. A more southerly jet will spin up another major storm over the Plains and Midwest again this week; the brunt of the moisture passing just east of Minnesota Wednesday and Thursday, brushing us with a cold rain and possible wet snow by Thursday. 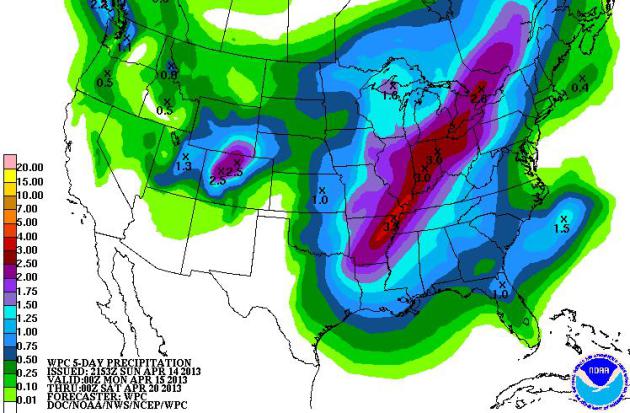 Drought-Busting Rains. NOAA’s QPF 5-Day rainfall forecasts shows some 2-4″ amounts from near Little Rock to Indianapolis and Detroit. The odds of a summer drought over the Midwest, Great Lakes and Ohio Valley are small, and dropping daily. I still think our drought will ease by June. 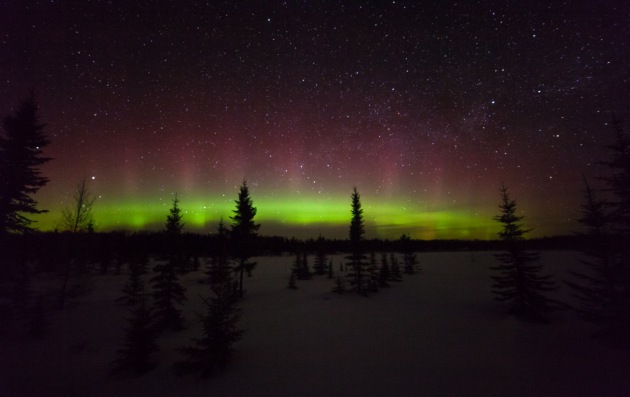 Textbook Aurora. Thanks to Steve Burns, who traveled all the way to Voyageur’s National Park to capture this stunning image of the Northern Lights. He told me that the mercury dipped below zero at his camp site. In mid-April? This year just keeps getting stranger and stranger.