Great Lakes Have Most Ice In Decades Thanks To Bitter Winter. Milwaukee’s Journal Sentinel has the story – 60% of the Great Lakes have ice cover – the most in 25 years. 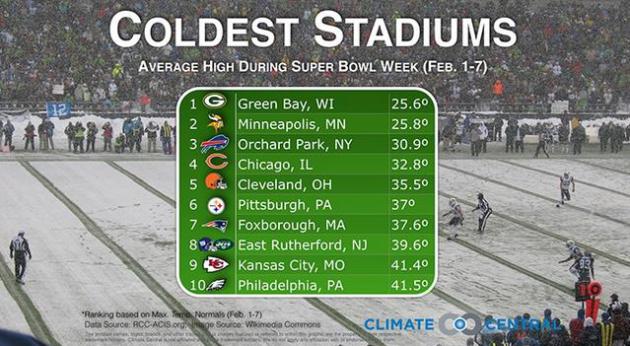 Super Bowl Will Be Far From A Winter Apocalypse. Clouds, 40F, maybe a passing (rain) shower or sprinkle? Not bad, considering the weather-alternatives on Groundhog Day. Here’s a clip from a story at Climate Central: “…So, ever since the NFL announced Super Bowl XLVIII would be played in MetLife Stadium, everyone predicted winter doom for the Big Apple’s big game: driving snowstorms, hopelessly gridlocked traffic on icy roads, fans frozen into meat popsicles. But while no one is going to mistake MetLife Stadium, located in East Rutherford, N.J., for the Orange Bowl, it doesn’t even crack the top 5 coldest NFL stadiums. And if the current forecast holds true, the game will be far from a winter apocalypse…”

Graphic credit above: “The 10 coldest stadiums in the NFL during the first week of February. While this year’s Super Bowl is in a cold-weather locale, it’s hardly the coldest place the game could be played.” 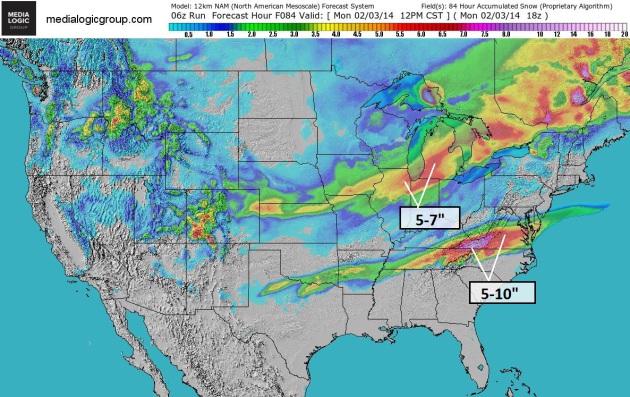 Snowy Stripes. A Pacific storm regenerates over the Lower Mississippi Valley, pushing a band of snow across the Mid South into the Virginias Tuesday and Wednesday. Farther north as much as 5-1-” may fell near Chicago late Tuesday into Wednesday morning of this week. Travelers beware. 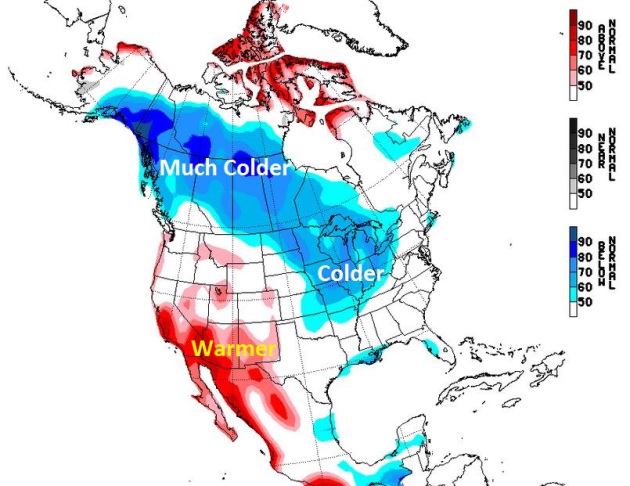 Cold Into Mid-February. I don’t see much in the way of relief looking out the next 10 days; NOAA NAEFS model guidance valid February 9-15 shows a cold bias lingering over the Upper Midwest and Great Lakes, with warmer than average temperatures for the southwest USA. 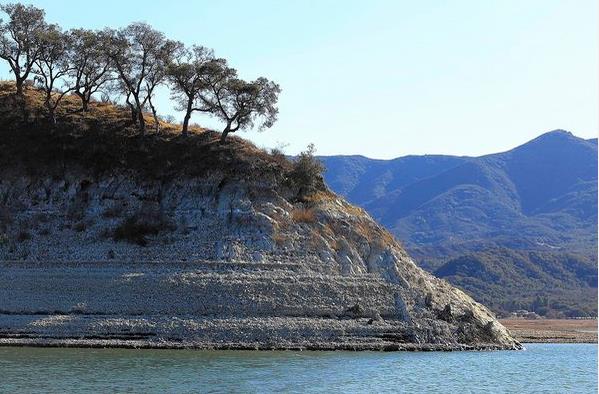 California Drought Could Force Key Water System To Cut Deliveries. Snow pack over the Sierra Nevada is 12% of normal. Stating the obvious: not good. Here’s an excerpt from The Los Angeles Times: “Officials Friday said that for the first time ever, the State Water Project that helps supply a majority of Californians may be unable to make any deliveries except to maintain public health and safety. The prospect of no deliveries from one of the state’s key water systems underscores the depth of a drought that threatens to be the worst in California’s modern history. But the practical effect is less stark because most water districts have other sources, such as local storage and groundwater, to turn to. Officials stressed that the cut did not mean faucets would run dry…”

Photo credit above: “The water level in Lake Cachuma is dropping, in part because of sustained drought conditions across the state.”  (Brian van der Brug, Los Angeles Times / January 14, 2014). 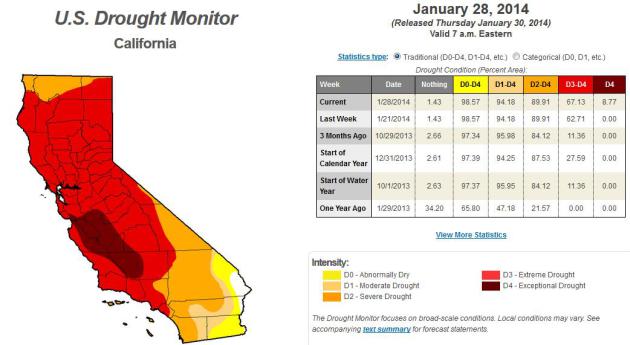 California’s Devastating Drought Isn’t Going To Get Better Any Time Soon. Slate advances the drought narrative for California with a few statistics that made me do a double-take; here’s an excerpt: “…It’s the first time that any part of California has registered an exceptional drought in the 14-year history of the NDMC drought monitor. Now, 14 years is an admittedly short period of time. But thanks to the magic of science (and tree rings), we can now safely say that California hasn’t been this dry since around the time of Columbus, more than 500 years ago. What’s more, much of the state’s development over the last 150 years came during an abnormally wet era, which scientists say could come to a quick end with the help of human-induced climate change…”

* the latest U.S. Drought Monitor information for California is here. 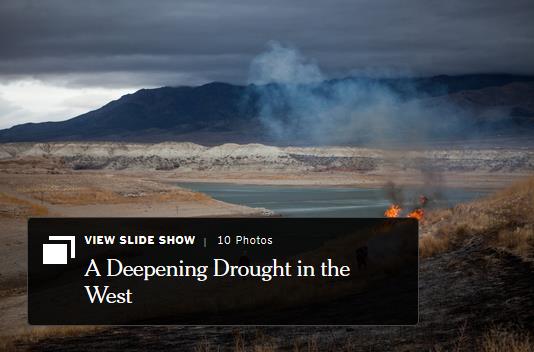 Severe Drought Has U.S. West Fearing Worst. The New York Times has the story – here’s a clip: “…This latest development has underscored the urgency of a drought that has already produced parched fields, starving livestock, and pockets of smog. “We are on track for having the worst drought in 500 years,” said B. Lynn Ingram, a professor of earth and planetary sciences at the University of California, Berkeley. Already the drought, technically in its third year, is forcing big shifts in behavior...”

Image credit above: Max Whittaker for The New York Times. 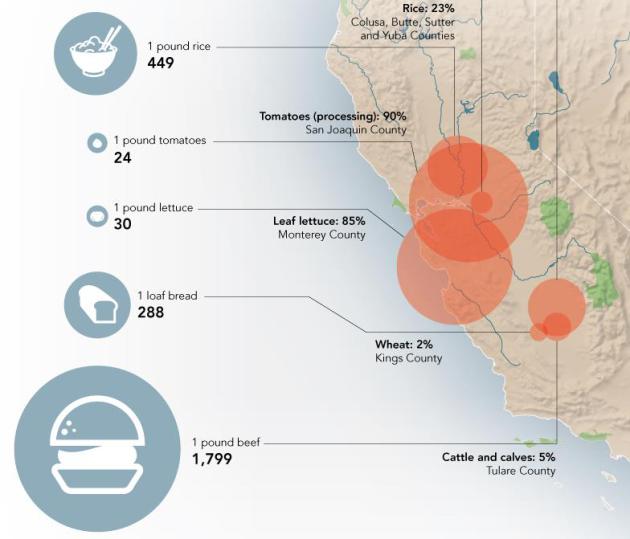 If You Like To Eat, You Should Really Be Worried About California’s Drought. Huffington Post has the story (and impressive infographic that may leave you with an urge to rush out to the grocery store to buy fresh produce); here’s a clip: “California had record low rainfall in 2013. It was potentially the driest year in the last 500 years, according to tree rings, and dry weather is expected to last through 2014. The state’s $44.7 billion agriculture industry may take a significant hit, and prices for foods that are water-intensive to produce — such as beef, milk, and tomatoes — might start reflecting California’s water woes.” 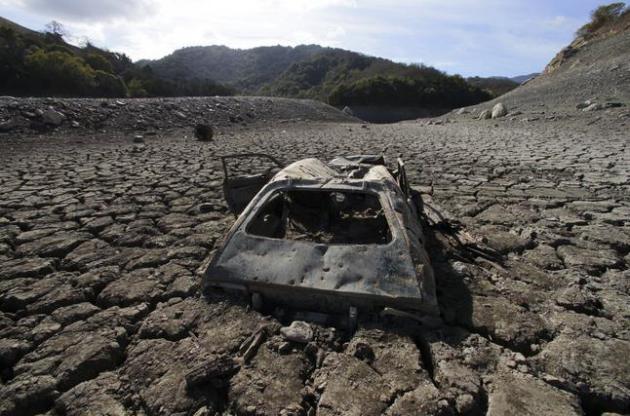 5 Ways To Bust California’s Drought. A series of slow-moving Pacific storms would probably be at the top of the list – the beloved “Pineapple Express”, a conga-line of storms stretching from Honolulu to Los Angeles would look pretty good right about now. That isn’t happening, so what can Californians do to avoid a worst-case scenario? Here’s a clip from Time Magazine: “…How Californians use water—or more importantly, don’t use it—will have an enormous impact on just how bad this drought becomes, and on whether the Golden State can prepare for a climate that is likely to be even hotter and drier. Here are five ways California could beat the drought.

Drip Irrigation: Agriculture in California uses about 80% of the state’s developed water supply, but without irrigation, fertile farmland like the Central Valley—which alone produces about 8% of the country’s farm product—would go barren…”

Photo credit above: “A once-submerged car exposed at the Almaden Reservoir in San Jose, Calif., Jan. 31, 2014. A punishing drought is sweeping California and much of the West, confronting authorities with the worst water shortage the region has faced in more than a century, with near-empty reservoirs, parched fields, starving livestock, clouds of smog and outbreaks of wildfires.” (Jim Wilson/The New York Times).

The Hard Realities Of Life In Paradise: Surviving A Wildfire! In light of record drought and the potential for devastating wildfires across California and much of the western USA, here’s an excerpt from a post at Topanga Messenger: “…With record drought in California, 2014 could be one of the most dangerous years for wildfire on record. The recent, unseasonable fire weather this January and the fire on Old Topanga should serve as a wake-up call for us all. It’s time to take proactive steps to make our homes and neighborhoods less vulnerable to wildfire. Given our fire history we know that it’s not a matter of if wildfire will come to Topanga, but when. The bad news is that the Los Angeles County Fire Department estimates that embers caused the ignition of 80 to 90 percent of the homes that burned in recent wildfires…” 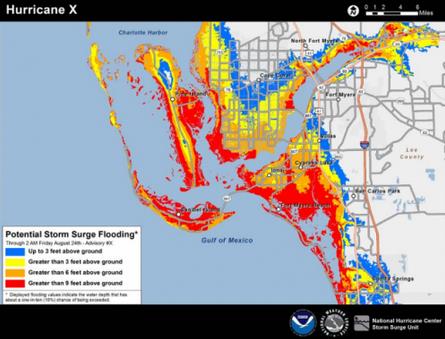 When Next Hurricane Hits, Storm Surge Will Be Mapped. Forecasting surge levels is as much an art as a science, as Sandy proved. Here’s an excerpt of a post from meteorologist Andrew Freedman at Climate Central: “The next time a hurricane hits the Gulf or Atlantic coast, the National Weather Service will be ready with a new map that it hopes will more effectively communicate the threat of deadly storm surge flooding to the public.The NWS plans to issue “potential storm surge flooding maps” together with tropical storm and hurricane watches beginning with the 2014 hurricane season, the agency announced Friday…” (Map credit: NOAA).

The Prophet Of No Profit. I have a tremendous amount of respect for Jeff Bezos and what he’s built at Amazon, short-term profits be damned. Frankly, that’s one of the few companies I’d really miss, if it went away. Here’s a guy who’s looking out 5-10 years, not just the next quarter. Slate has the reveal – here’s a clip: “…The prevailing theory in Silicon Valley is that it’s a mistake for new companies to focus too much on developing revenue. People use a social service such as Pinterest in part because many other people are using it. Under the circumstances, it makes sense for a company to focus first and foremost on building a great product and getting people to use it. Once you’ve reached a critical mass of users, then comes the time to think about revenue strategies…”

The Pleasure And Pain Of Speed. The world is speeding up – more stimuli, a daily data dump. Are we hard-wired, genetically, to keep up? Here’s a snippet of a fascinating story at Nautilus: “…As life has sped up, we humans have not, at least in our core functioning: Your reaction to stimuli is no faster than your great-grandfather’s. What is changing is the amount of things the world can bring to us, in our perpetual now. But is our ever-quickening life an uncontrolled juggernaut, driven by a self-reinforcing cycle of commerce and innovation, and forcing us to cope with a new social and psychological condition? Or is it, instead, a reflection of our intrinsic desire for speed, a transformation of the external world into the rapid-fire stream of events that is closest to the way our consciousness perceives reality to begin with?…” 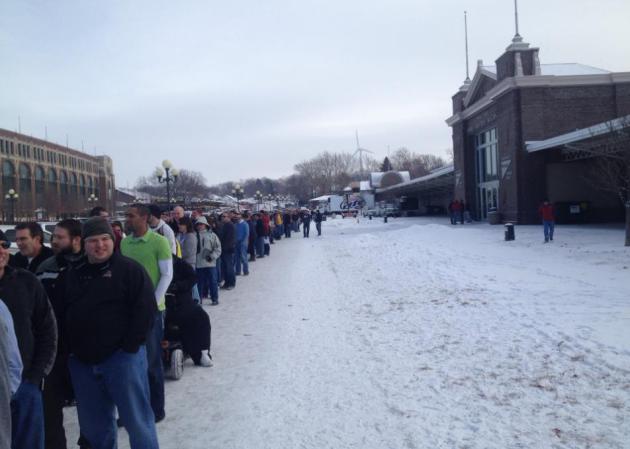 For Those Who Can’t Get Nearly Enough Bacon. Yep, they’re lined up for The Blue Ribbon Bacon Festival – “Baconfest” – at the Iowa State Fairgrounds in Des Moines. If you look carefully you can see a few heart surgeons handing out business cards. Why am I hungry all of a sudden?