Carlos Forms In Pacific, Could Gulf Be Next?
A Colorado City May Hit Hottest Temperature
A Few Chances for Severe Storms in the Rockies this Weekend
Flash Flooding & Severe Weather Threat in the Northeast
Isolated Flooding and Severe Storms This Weekend in the South
Southwest Fires and Dangerous Heat
All Weather News

Winter on hold thru Thanksgiving for much of the country

Revised Winter Outlook (Don’t Hold Your Breath). NOAA’s Climate Prediction Center has tweaked the November thru January forecast for the USA, calling for milder than average over the Southwest and Southern Plains with a 30-40% risk of colder than normal conditions across the eastern Dakotas, Minnesota and northern Wisconsin. This is based on a fading El Nino signal in the Pacific, and a negative phase of the NAO, the North Atlantic Oscillation, which may keep prevailing jet stream winds howling from the northwest much of the winter. But CPC admits that this is a very difficult forecast, I get the sense that confidence levels are low. I’m not convinced we’re going to wind up with a colder than normal winter, at least not yet. Maps above: CPC and Ham Weather. 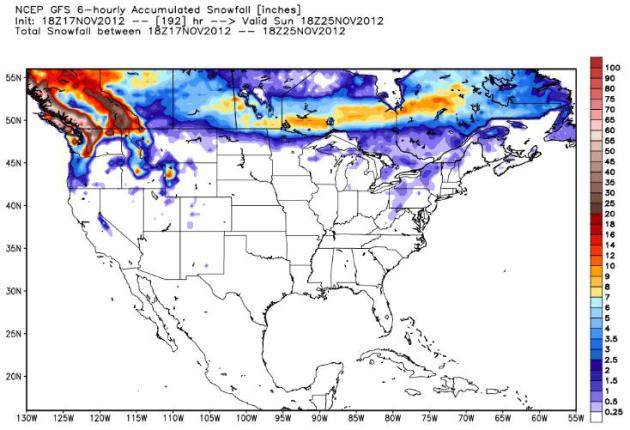 Total Snowfall By Midday Sunday. Snowmobiles and cross country skis will collect dust for at least another week, probably longer, I fear. The GFS model keeps the most significant snow just north of the U.S. Canadian border thru next weekend; some 12-24″ amounts for the Cascade Range of the Pacific Northwest – a litlte lake effect snow kicking in near Cleveland and Buffalo behind Friday’s cold shot. But for the most part: winter takes the week off, nationwide. 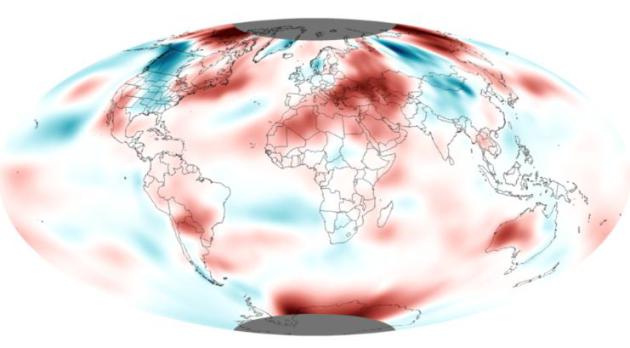 October: 5th Warmest On Record. Details from NOAA’s Environmental Visualization Laboratory: “Recently released analysis by NOAA scientists at the National Climatic Data Center reveals that October 2012 was the 5th warmest on record, dating back to 1880. This image, using data from NCDC’s Global Historical Climatology Network shows areas of warmer (red) and cooler (blue) than normal temperatures. While extreme warmth dominated the high latitudes, higher-than-average monthly temperatures were observed across much of Europe, western and far eastern Asia, northeastern and southwestern North America, central South America, northern Africa, and most of Australia. Meanwhile, much of northwestern and central North America, central Asia, parts of western and northern Europe, and southern Africa were notably below average….” 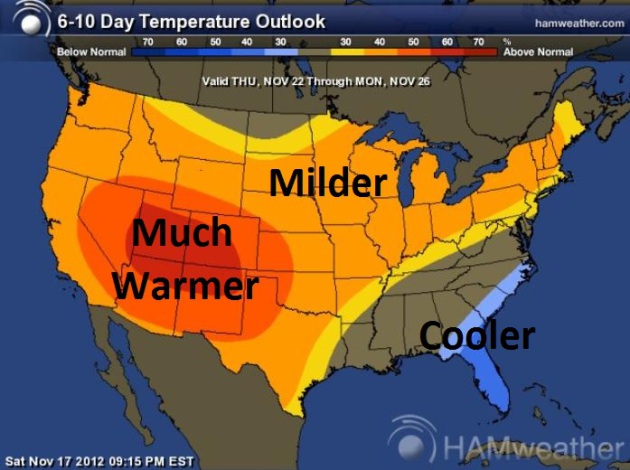 Time Warp. NOAA CPC’s 6-10 day temperature outlook keeps most of America warmer than average thru the end of next week, much warmer for the Southwest, but cooler than average from Florida to the Outer Banks of North Carolina. Map: Ham Weather. 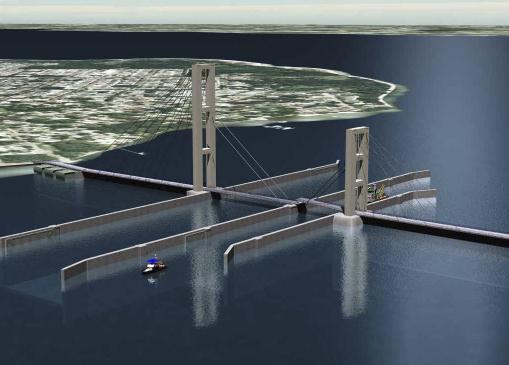 Billions Spent On Flood Barriers Now Might Save New York City Later. I’m not sure they can build a flood barrier big enough to contain a surging Atlantic Ocean, but possibly Manhattan. It will cost tens (hundreds?) of billions of dollars to build walls around major coastal cities. Here’s a clip from a Bloomberg News story at oregonlive.com: “Could a surge-protection barrier have saved New York City from much of the flood ravages of superstorm Sandy? Malcolm Bowman and other hydrologists are convinced it could have. Bowman, an oceanographer who has spent much of a 40-year career warily watching the tidal flows in and around New York Harbor, recalls being on the construction site of Manhattan’s South Ferry subway station a few years ago. “It was just a concrete box underground then,” said Bowman,, then an observer filming a documentary. He looked up a long stairway leading to blue sky and asked a construction official, “Would you mind telling us how far above sea level is the entrance there at street level?” Eleven feet, the official said — an elevation designed withstand possible floods from a storm that occurs once in 100 years. “I said, ‘That sounds awfully low to me and, by the way, that storm could come next week,’ ” said Bowman, a professor at the Marine Sciences Research Center of State University of New York at Stony Brook, Long Island…”

Graphic credit above: “A rendering of a storm barrier with a drawbridge on Arthur Kill, intended to protect the Staten Island borough of New York in a Category 3 hurricane, in an undated handout photo. Because of the recent effects of Hurricane Sandy hitting the area, Gov. Andrew Cuomo said elected officials have a responsibility to consider new and innovative plans to prevent similar damage in the future.” (CDM Smith, Inc. via The New York Times) 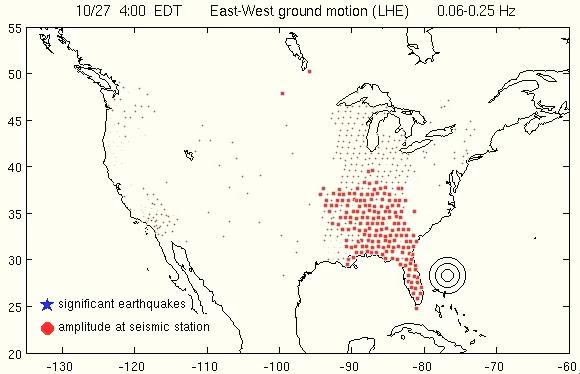 Sandy Shook U.S. Like An Earthquake. How severe was Sandy? Powerful enough to physically shake the ground many hundreds of miles away. Here’s an excerpt of an amazing article and animation at Our Amazing Planet: “Hurricane Sandy pummeled the United States from Florida to Wisconsin, and its fierce winds caused a vast swath of ground to shake, a new earthquake-monitoring animation shows. The visualization shows seismic stations lit up as the storm approached Florida on Oct. 26. The earthquake monitors detected rolling seismic waves caused by Sandy’s fierce winds out at sea. The earthquake-monitoring network always “hears” a continuous hum of background noise generated in the ocean, called microseism, said Alex Hutko, a seismologist at the Incorporated Research Institutions for Seismology (IRIS) in Seattle, and creator of the Hurricane Sandy animation…” 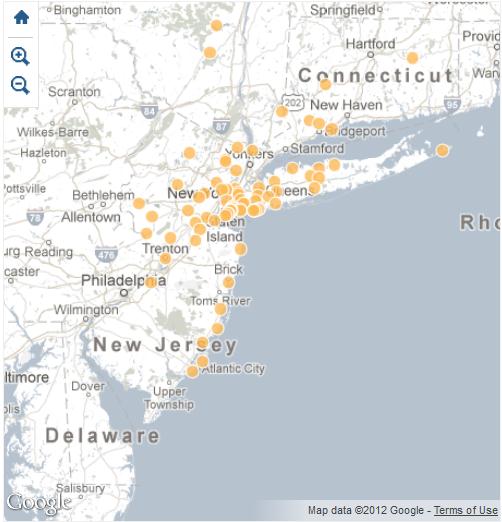 New York Will Demolish Hundreds Of Storm-Hit Homes. The New York Times has the story; here’s an excerpt: “New York City is moving to demolish hundreds of homes in the neighborhoods hit hardest by Hurricane Sandy, after a grim assessment of the storm-ravaged coast revealed that many structures were so damaged they pose a danger to public safety and other buildings nearby. About 200 homes will be bulldozed in the coming days, almost all of them one- and two-family houses on Staten Island, in Queens and Brooklyn. That is in addition to 200 houses that are already partially or completely burned down, washed away or otherwise damaged; those sites will also be cleared…”

Graphic Credit Above: Mapping Hurricane Sandy’s Deadly Toll: From the NY Times: “At last count, officials were attributing more than 100 deaths to Hurricane Sandy. Some patterns emerged in mapping the deaths in the region. Elderly residents were hit especially hard, with close to half of the people who died age 65 or older. In New York City, the majority of deaths occurred in Queens and on Staten Island, and most people perished at the height of the storm, drowned by the surge.” 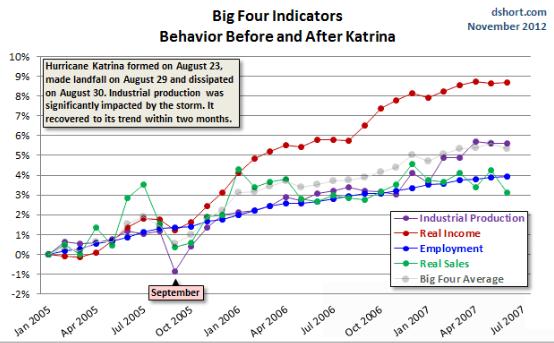 An Economic Lesson From Hurricane Katrina. I found this story from Doug Short at Business Insider to be an insightful look at the impact of major hurricanes on the U.S. economy: “In studying the data for my latest Big Four Economic Indicators update, I wondered how much impact Hurricane Sandy might have had on the economy in October and what to expect in the months ahead. I thought it woudl be interesting to take a close look at the behavior of the Big Four in the months before and after Hurricane Katrina hit the coast in August 2005. Here is a chart and table similar to the one I maintain for the current Big Four Data….”

In studying the data for my latest Big Four Economic Indicators update, I wondered how much impact Hurricane Sandy might have had on the economy in October and what to expect in the months ahead. I thought it would be interesting to take a close look at the behavior of the Big Four in the months before and after Hurricane Katrina hit the coast in August 2005.
Here is a chart and table similar to the one I maintain for the current Big Four data. The chart illustrates the growth of the four indicators from January 2005 to June 2007. The table below shows the month-over-month percent change and the average of the four for the twelve months of 2005.

Hurricane Sandy Brings Birds From Florida, Arctic To New England. What is most impressive about Sandy was the size of the storm, the thousand-mile-wide cone impacted by tropical storm force or stronger winds – winds that swept birds into its circulation. Here’s an excerpt of a curious story from CBS Boston: “They’re not supposed to be here, birds from Europe, the arctic and the southern states, blown here by the heavy winds of Superstorm Sandy. There’s the Northern Lapwing from Europe, the Magnificent Frigate Bird from the south and the tiny arctic Dovekie, all pushed by monstrous forces, some trapped in the eye of a hurricane and deposited here in New England. “Any storm that extends from Europe to North America, that’s a huge event and accordingly birds that are anywhere in its path are going to be affected. I’m sure there are a lot of casualties we’ll never know about,” says Wayne Petersen, a bird expert for Mass Audubon…”

Thanksgiving Preview. ECMWF model data (courtesy of WSI) still shows a very good-looking Thursday across most of the USA, little or no rain on the Thanksgiving Day weather map (with the exception of a few light showers near Oklahoma City). After starting out near 50 temperatures will probably fall thru the 40s in the Twin Cities, a definite whiff of wind chill across the Dakotas by Thursday. 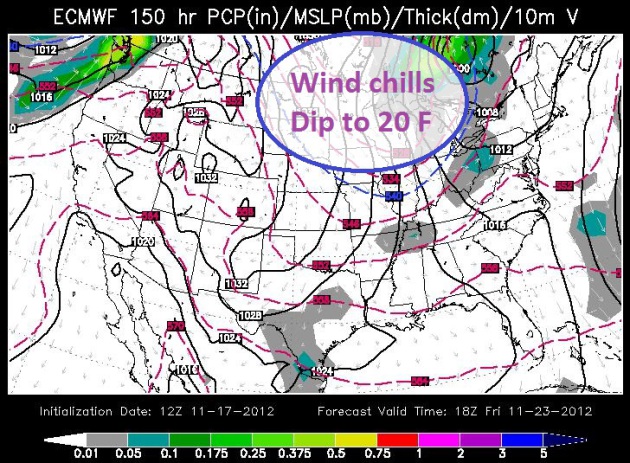 Cold “Black Friday” On Tap. The latest ECMWF run (courtesy of WSI) shows an accelerating cold front, a push of Canadian air enveloping the Upper Midwest and Great Lakes by Friday, with highs in the 30s and wind chills dipping into the 20s. If you plan on standing in line for that have-to-have holiday gift later this week, make sure you’re ready for a shot of winter 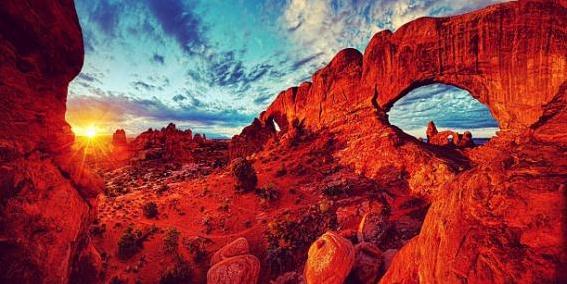 The U.S Interior On Instagram. Check out some remarkable photos via slate.com, including the pic above from Arches National Park in Utah.