Winter Weather, In All Its Forms.

A storm system is going to be going through the upper mid-west today, bringing a whole mixed bag, a cornucopia so to speak, of winter weather.  We’re talking, rain, ice, sleet, snow and everything else in between, coming down across portions of the Dakotas, Minnesota, Wisconsin and the upper peninsula of Michigan.

Now we aren’t expecting conditions to be AS bad as the photo above taken in Geneva, Switzerland back in Feb. 2012 (taken from theatlantic.com), but you will see an icy coating across some parts of the upper mid-west.  This will make for traveling through the area a little treacherous, especially in areas where the snow has started or is falling and piling up.  The ice would have come down first and made for an icy coating on the roads, and as you are driving through the snow, you may have spin outs, slide off the road or into another vehicle, like these motorists found out the hard way below (from sabolscience.blogspot.com) 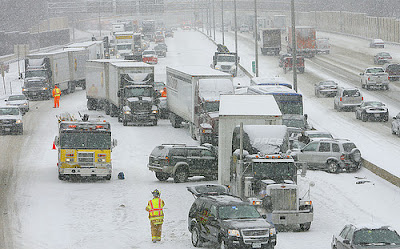 So here is the set up going on today in Minnesota.  Temps were for many places, at or above freezing, and above normal yesterday.  Minneapolis hit a high of 39° (avg 27°), Saint Cloud went to 34° (avg 24°) and International Falls to the north went up to 32° (avg 19°).  When the storm came in late last night, it brought in moisture into a warm environment, leading to rain falling.

As the rain came down, it cooled the air and temps started to drop in some spots, while others, cold air got sucked into the storm and temps dropped quicker.  Temps earlier looked like this.  The white line indicates where temps are around 32°.

We zoomed in towards the Minnesota area and saw what towns were right on the freezing point.  Marshall, MN is at 32° and was in an Ice Storm Warning earlier but that has since been cancelled.  But for a while, they were seeing freezing precipitation.

Rain changed over to an icy mixture and then to snow, and started to pile up across western and northern Minnesota.  Lake Andrusia, in northern portions of Minnesota just east of Bemidji, had temps in the low 30s earlier, and as the rain fell, it changed over to snow and piled up on the thermometer, the little bear with the santa hat, and the snowman family.

The radar earlier in the day, showed the rain across about half of the state, with a change over occurring in western Minnesota.  Notice the pink on the satellite & radar image below.  It extends into South Dakota.  Where it is darker, that is where freezing precipitation is falling at a faster rate.

But then later on, the freezing precipitation started to change to snow, and the blue on the radar (which indicates snow) started to spread out towards International Falls and into Canada.  The white line shows where temps are at the freezing point of 32°.  So right around that line and to the south/east, there could be a wet, slushy snow falling.

Winter weather advisories are in place for numerous counties across Minnesota with some extending into South Dakota and into Wisconsin.  Through the afternoon hours, we can expect to see some freezing rain and about 2-5″ of heavy, wet snow.

In fact, here are the projected snowfall totals.  Cities such as Alexandria, Brainerd, and International Falls will see the bulk of the snow adding up on the grounds.  The Twin Cities would be lucky to get a coating on the roads, but likely will see some added to the snow pact that is already there, leftover from the last storm.

Icy accumulations could be about a tenth of an inch.  I know that doesn’t seem like much, but it is enough to cause cars to skid off roads and into other vehicles.

Here are a few graphics we whipped up about freezing rain, sleet and snow.

Time to wrap things up here on the good ol’ blog.  I hope you stay safe, take your time on the roads and enjoy the weekend.