Just a few weeks after Hurricane Andrew struck south Florida as a category 5 hurricane, the US suffered another devastating blow by a major hurricane, this time Hurricane Iniki in the Central Pacific Ocean.  The 1992 central Pacific season was especially active, with 11 storms in the basin, probably due to the concurrent El Niño event.  Iniki formed into a tropical depression on September 5th, and slowly intensified to a tropical storm three days later while moving mainly westward.

As it intensified into a major hurricane, a large trough caused Iniki to turn northward and accelerate toward the island of Kauai where it made landfall on 11 September as a category-4 hurricane, the strongest on record to ever impact Hawaii.  Iniki caused $1.8 billion dollars in damage to the impacted islands, and six deaths were recorded.  This also makes Iniki the most damaging and powerful hurricane to hit the islands. Iniki is still in the top 5 of most costly hurricanes in the Pacific.

Every island in the state suffered to a greater or lesser extent from the heavy and destructive surf
and from strong damaging winds brought by Iniki. As with other recent hurricanes, however, the
island of Kauai took the brunt. The damage here was widespread, with only the western sections
of the island being spared from the most severe devastation.  According to the Red Cross, 14,350 homes on the island were affected with 1,421 destroyed and 5,152 suffering major damage. Wind damage
was generally the major contributor, although a number of buildings along the coast that were
subject to surf damage suffered nearly total destruction.

Winds accounted for most destruction. The highest speeds occurred when Iniki was just south of
the island of Kauai. Based on USAF recon flights and satellite information, surface winds (all
winds listed in this report will be surface winds unless otherwise denoted) at this time were
estimated to be 145 MPH with gusts as high as 175 MPH. During the four hours preceding eye
passage, winds increasing to more than 100 MPH with frequent higher gusts battered Kauai. 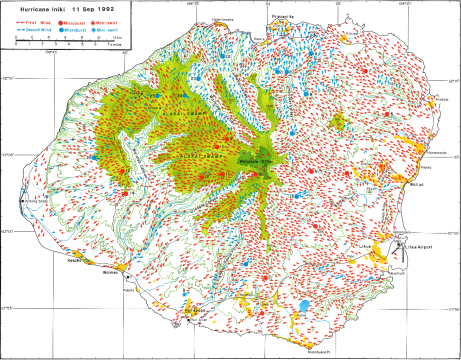 A few days after landfall, Professor Emeritus Ted Fujita and a team from the University of Chicago surveyed the island of Kaua’i and produced a comprehensive damage survey.  They documented a number of microbursts and mini-swirls that accompanied Iniki as it traversed the island.

Despite the widespread damage, death and injury figures were surprisingly low. Seven persons died from injuries associated with Iniki while about 100 were injured. You can read more on Hurricane Iniki from the National Hurricane Center.