NOAA's Climate Prediction Center issued their 90 day forecast covering the months of April, May, and June today. Over those months, odds favor above average temperatures for the southern two-thirds of the U.S., extending from California across the central Plains and into the Northeast. The greatest likelihood of warmer than normal temperatures extends from the Southwest across Texas and the Gulf Coast. The Northern Rockies is the only region leaning towards below-average temperatures during the April through June season. 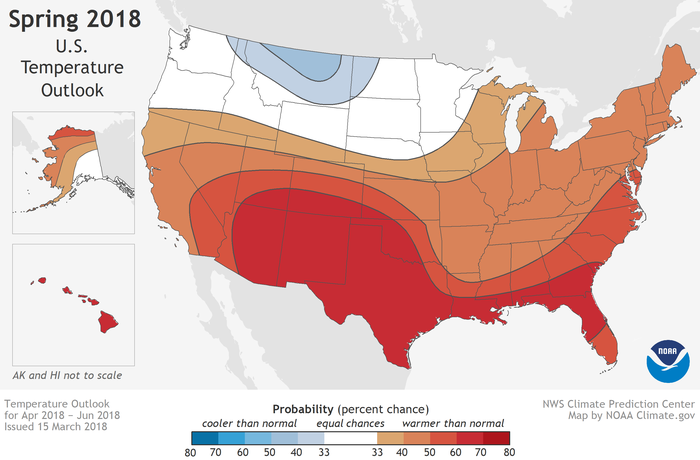 Below-average precipitation is anticipated across much of the West and South, extending from California to the south-central Plains, including Texas and parts of Oklahoma where drought is currently affecting the region. It is most likely to be wetter-than-average for much of the northern U.S., extending from the northern High Plains, across to the Great Lakes and Ohio Valley, eastward to include the mid-Atlantic and Northeast as well as for northern Alaska and Hawaii. 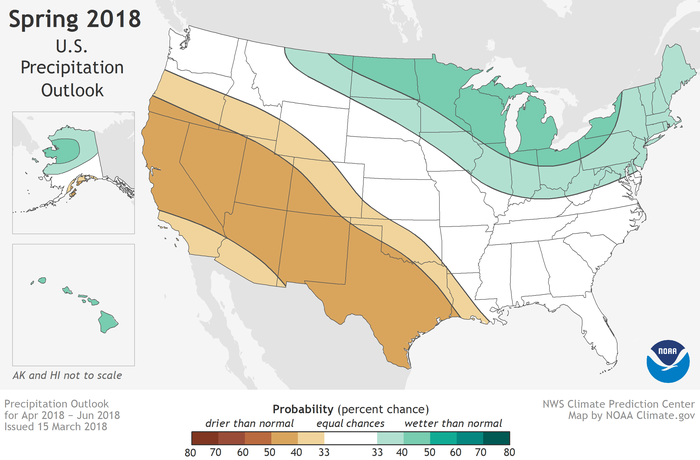 The Climate Prediction Center states that "a La Nina Advisory remains in effect as of early March, reflecting that conditions in the ocean and atmosphere remain consistent with La Nina, however, these conditions decayed considerably in the last month." Neutral Pacific Ocean temperature conditions are forecast to rapidly develop and are likely to continue into the second half of the year. Along with the La Nina forecast, soil moisture and snowpack were influenced the forecast.

https://www.youtube.com/watch?v=B27D6jH4Udg Info taken from NOAA Climate and NOAA Media For WeatherNation: Meteorologist Mace Michaels
All Weather News
Active Weather Returns to the Northwest
There has been a quieter streak across the Pa
3 Feb 2023 1:50 AM
Snow Returns to the Sierra This Weekend
After a period of a few dry weeks, we are gea
3 Feb 2023 1:40 AM
Heavy Rain & Severe Weather Returns to the Gulf
The active Flood Watch was just dropped for t
3 Feb 2023 1:30 AM
Clipper System & Lake Effect Bring Light Snow to the Northeast
The first round of snow have wrapped up for t
2 Feb 2023 9:50 PM
Significant Icing Event Causes Widespread Power Outages & Halts Travel Through the South
We have seen significant icing this week with
2 Feb 2023 9:40 PM
Life Threatening Cold Arrives in the Northeast Friday & Saturday
We are gearing up for some of the coldest air
2 Feb 2023 9:35 PM
Single Degree Highs Locked into the High Plains
Arctic air from Canada has been grasping much
2 Feb 2023 9:30 PM