Closing out the year and tallying up the damage from Mother Nature has brought 2022 to the year with the third most billion dollar disasters in history for the U.S., tied for third place with 2017 and 2011 with a total of 18 disasters totaling 1 billion dollars in damages or more. This year also is one of our most expensive for disasters on record: $165B (the final number is likely to rise after the cost of the December 21-26 winter storm are added into the total). Of the 18 events: 3 tropical storms, 1 drought event, 1 wildfire event, 1 flood event, 1 winter event and 11 severe events that resulting in over $1 billion in damages each. 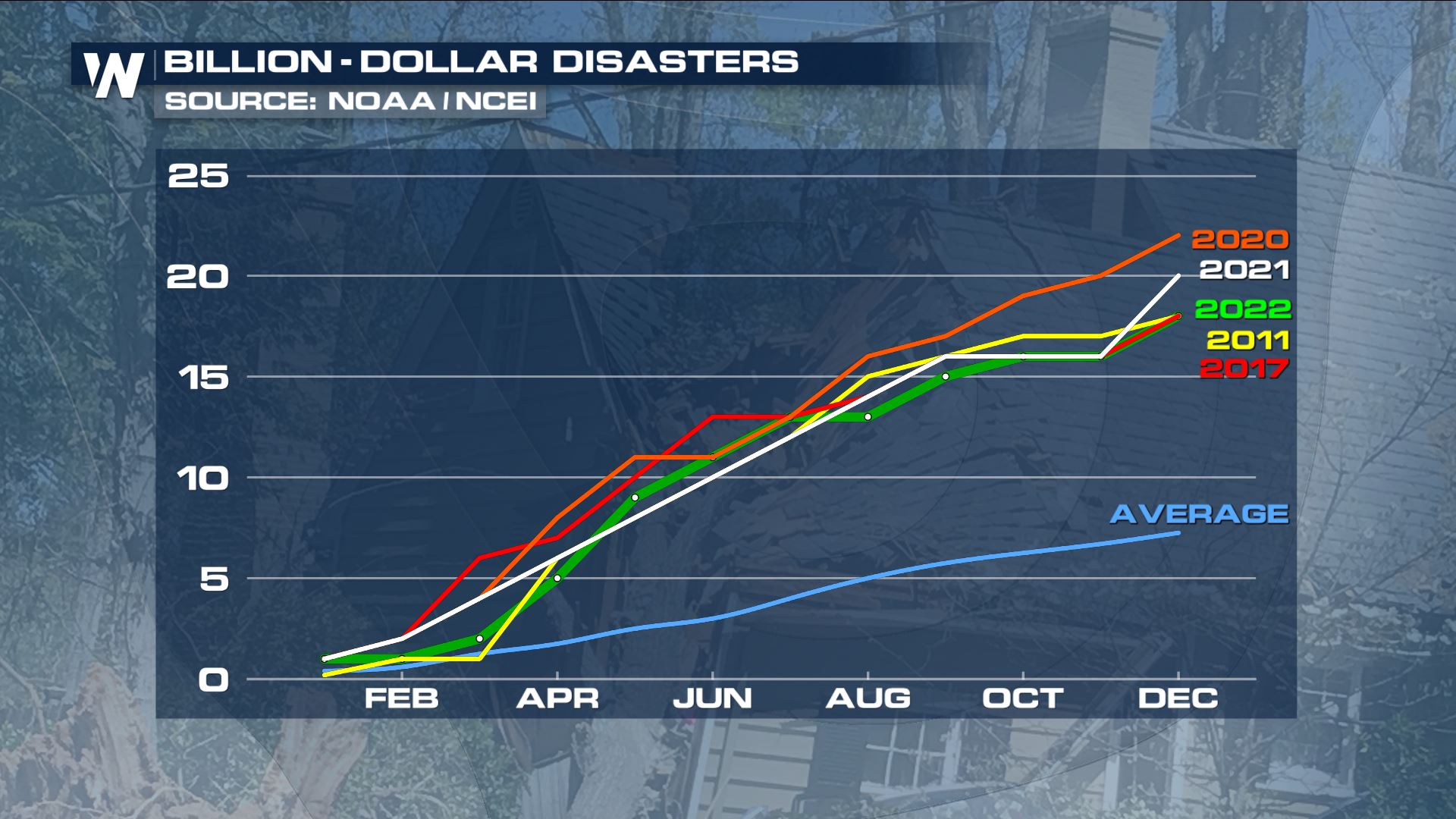 The figure of $1 Billion is arbitrary but determined on a number of indexes according to NOAA to include, "physical damage to residential, commercial, and municipal buildings; material assets (content) within buildings; time element losses such as business interruption or loss of living quarters; damage to vehicles and boats; public assets including roads, bridges, levees; electrical infrastructure and offshore energy platforms; agricultural assets including crops, livestock, and commercial timber; and wildfire suppression costs, among others." 2022 is the third costliest YEAR behind 2017 and 2005. Part of the reason these years are more expensive are due to individual events. Hurricane Harvey (2017) totaled $148.8B and Hurricane Katrina (2005) totaled $186.3B. (All of these costs and those in the rest of the article are cost-adjusted per the consumer price index for modern day expenses.) The most expensive disaster of 2022 was Hurricane Ian which hit Florida's Gulf Coast in late September and resulted in $112.9B in damages, the third costliest U.S. hurricane on record behind Katrina and Harvey. 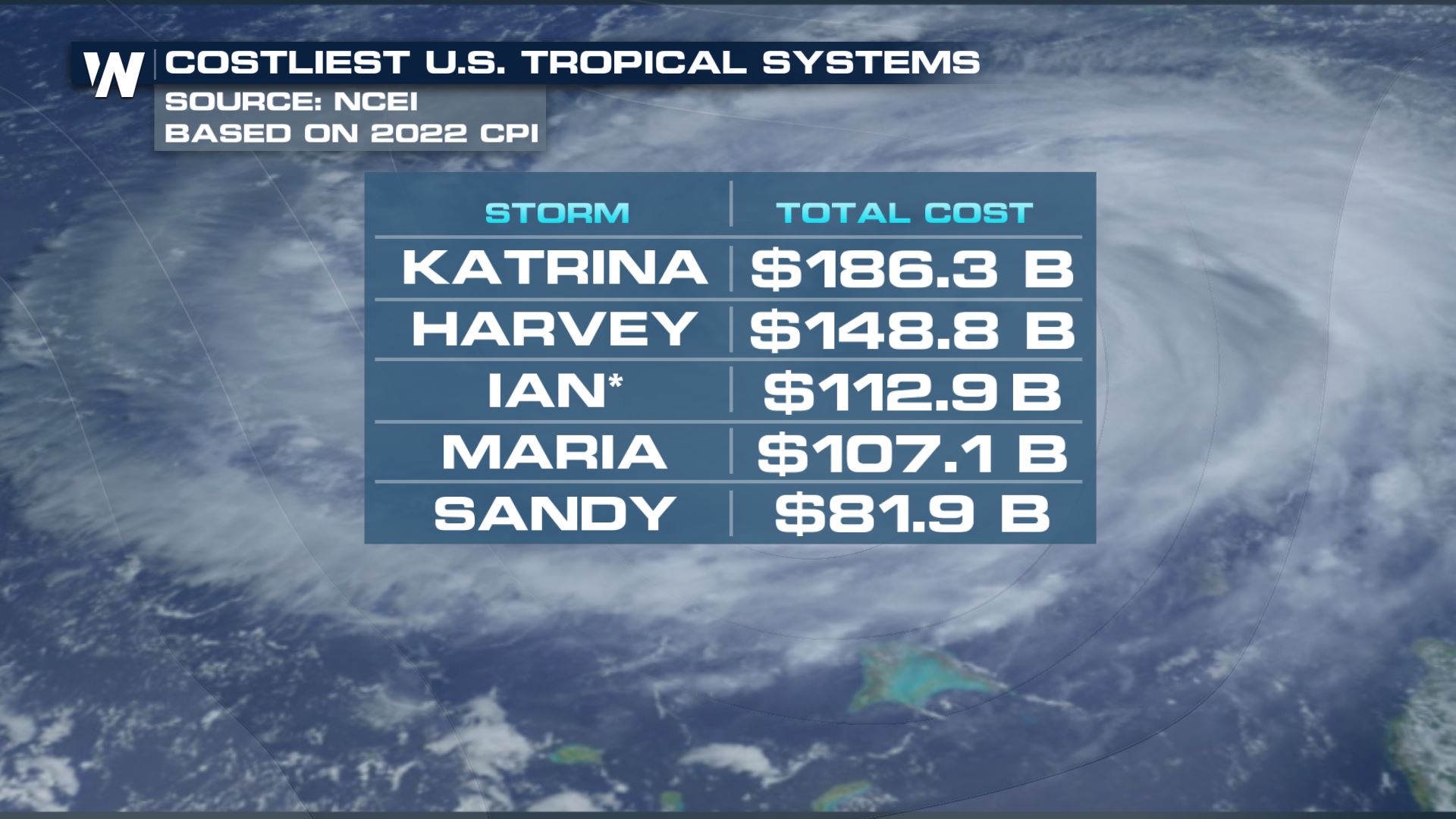 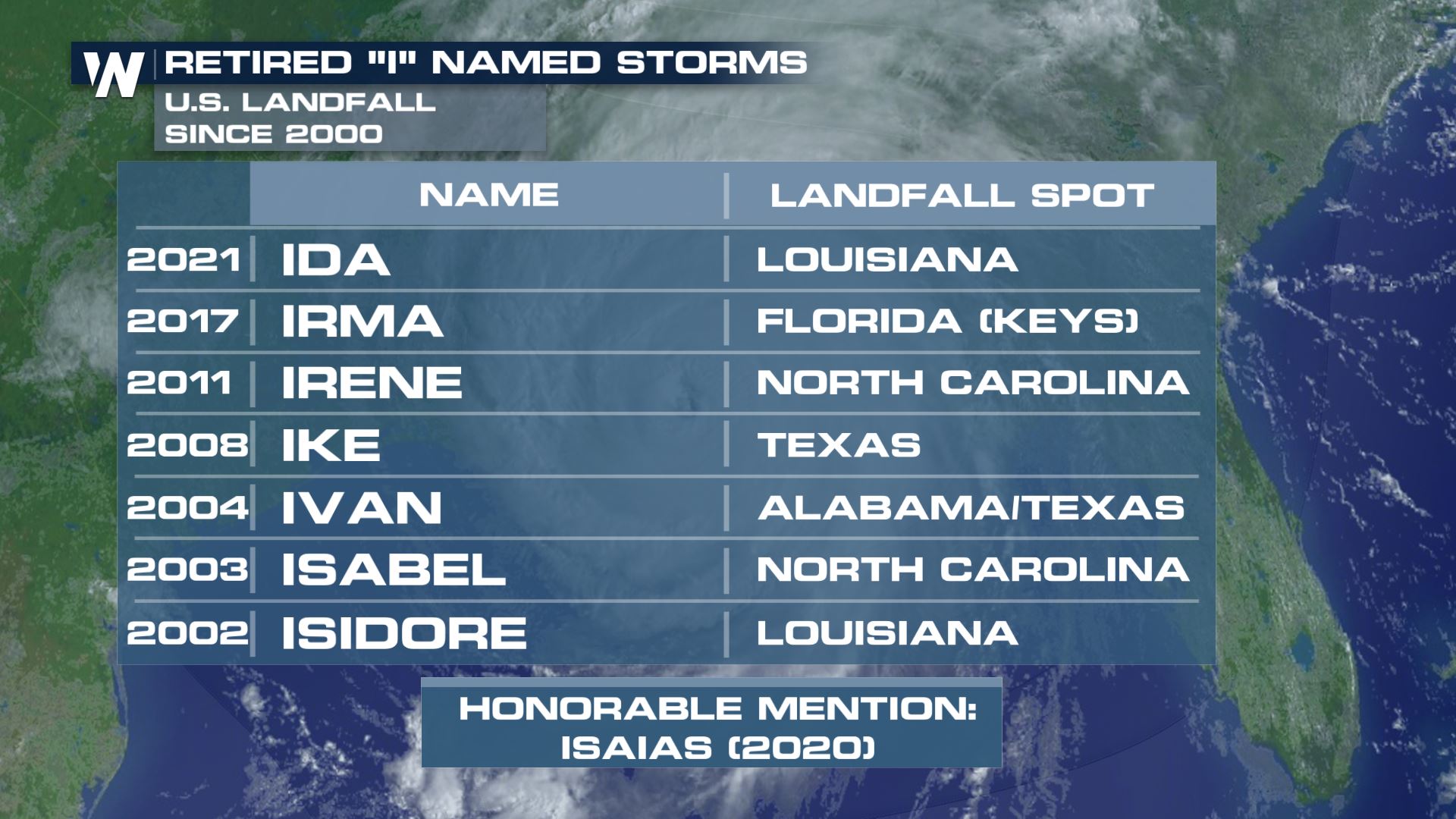 The most widespread disaster of this year, and second most expensive behind Ian, was the Western/Central Drought and Heat Wave, the most costly on record since record keeping began in 1980. The total impact of the drought and heat hit agricultural and urban areas alike, totaling $22.2B in damage. Record keeping for billion dollar disasters began in 1980 and events have been cost-adjusted using the Consumer Price Index to account for inflation over the last 50 years. It should be noted that some years have seen an increase in the number of disasters after the fact as previous events that didn't meet the $1B threshold now have due to inflation. According to NOAA, "we introduce events into the time series as they 'inflate' their way above $1B in costs in today's dollars. Every year, this leads to the introduction of several new events added from earlier in the time series". 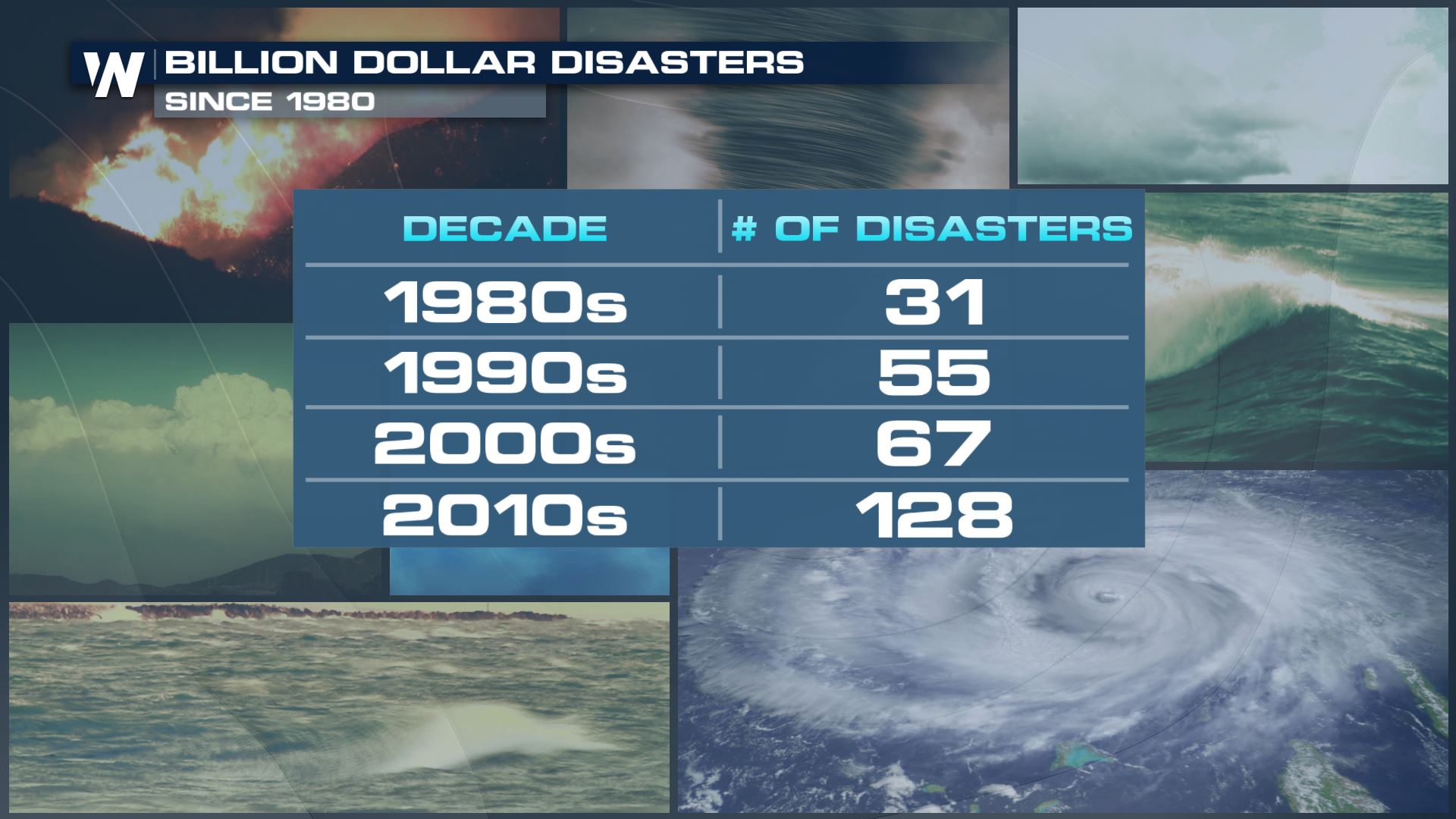 2020 broke the previous record of 18 billion dollar disasters when the U.S. saw a record 22. In 2021 we saw an equally active year, with a total of 20. This is just one metric to account for an increase in storms and doesn't account for the historical average of TYPE of disaster (i.e. tropical versus severe versus drought) and also doesn't take into consideration where the storm hits. A tropical storm that hits Houston or a hailstorm that strikes Atlanta is more expensive due to population than those same types of storms striking more rural portions of the country. Bottom line, the U.S. has seen 341 separate weather and climate disasters in 42 years with the total coast exceeding $2.475 trillion. 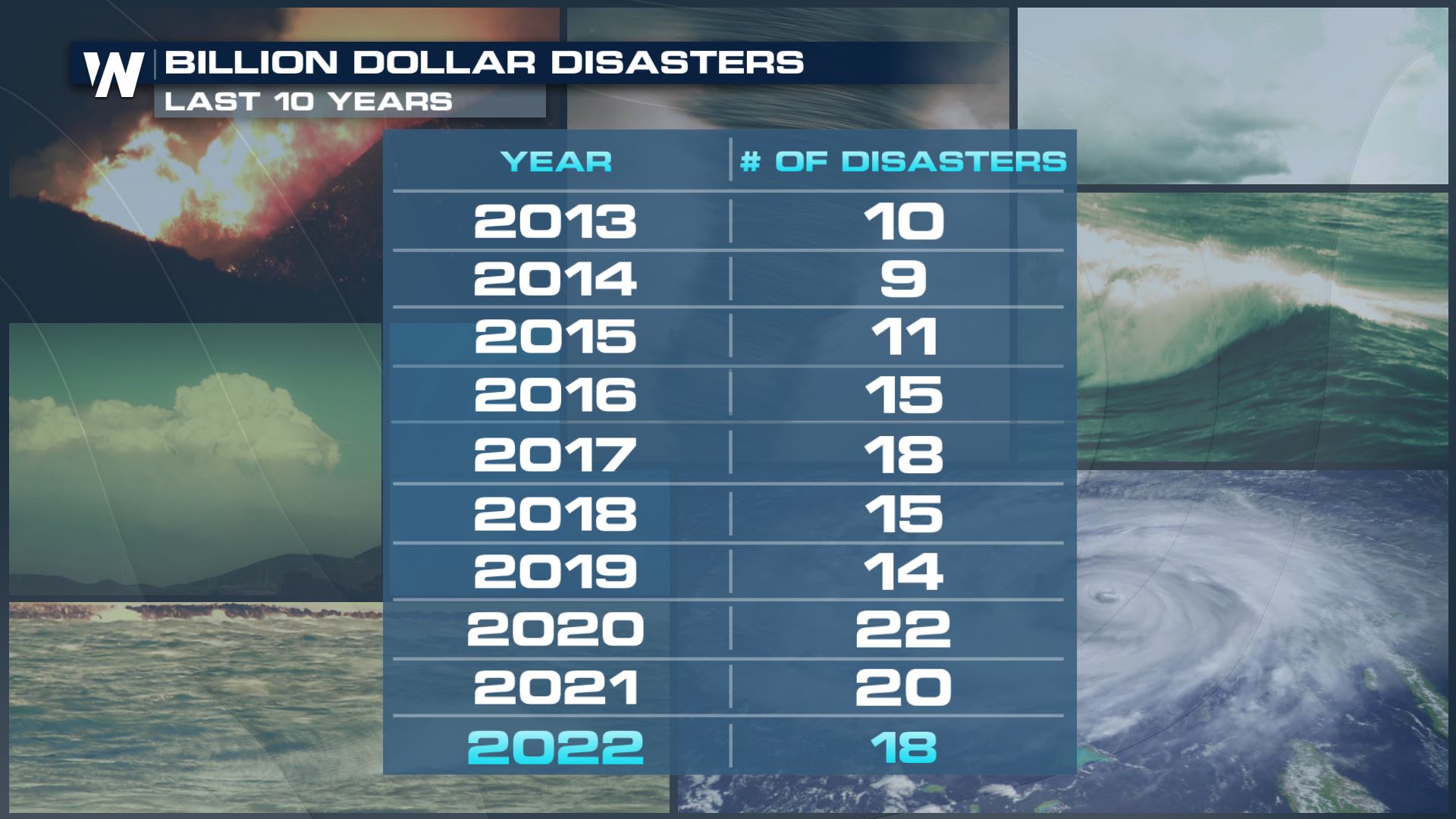 All Weather News
Tornado Watch Issued Through Tonight
A surface low and accompanying cold front wil
8 Feb 2023 11:20 PM
Ongoing Flooding through the Central Plains & Midwest
The flood risk is heightened through the Cent
8 Feb 2023 11:15 PM
Severe Weather Stretches into the Midwest Wednesday & Thursday
The same area of low pressure that is bringin
8 Feb 2023 11:05 PM
Heavy Rain, Ice & Snow from the Plains to the Great Lakes
Another system is forecast to move into the P
8 Feb 2023 11:00 PM
Surge of Warm Temperatures and Active Weather for New England Thursday and Friday
We are looking at the opportunity for a storm
8 Feb 2023 8:30 PM
Watching an Area of Low Pressure to Impact the Southeast with Heavy Rain & Snow this Weekend
The upper level low creating severe weather c
8 Feb 2023 7:15 PM
Heavy Snow in the Northwest through Wednesday
As a cold front has pushed onshore Tuesday, h
8 Feb 2023 11:12 AM