Meteorology Behind the Marshall Fire: Explaining the Mountain Wave

The most destructive fire in Colorado’s history occurred on December 30th, 2021, destroying over 1,000 homes. The Marshall Fire tore through the towns of Superior and Louisville with intense speed driven by extreme winds created by a mountain wave.

The National Weather Service in Boulder created this page, with detailed descriptions of the meteorological conditions that led to gusts reaching over 100 mph.

Much of the following below has been copied from that page, with a few minor altercations.

“High winds developed in the mid morning hours on Thursday, December 30th, 2021, the result of a mountain wave that developed as very strong westerly winds raced over the Front Range Mountains and Foothills and crashed down onto the plains.  The mountain wave remained nearly unchanged through the rest of the day, resulting in very persistent and extremely high winds. Mountain waves are usually focused very close to the base of the foothills and adjacent plains. On this day, sustained winds of 50 to 60 mph with gusts of 80 to 100 mph were felt along Highway 93 and points east to around Superior and at times, Louisville.  It takes just the right combination of meteorological parameters, including stability, wind shear, and wind magnitude to create a powerful and damaging windstorm like this one.  To further visualize what a mountain wave would look like, see the image below.

The schematic below represents the strong westerly winds moving down the mountain slope (in this case the Front Range Mountains and Foothills) and accelerating all the way to the base of the foothills.  From there, they spread east into the Superior and Louisville area, before suddenly weakening to the east (call the jump region).  It was interesting to note in this case, that easterly winds were observed at times immediately to the east of the “jump” area around Broomfield and Lafayette. This can also be referred to as a rotor.” 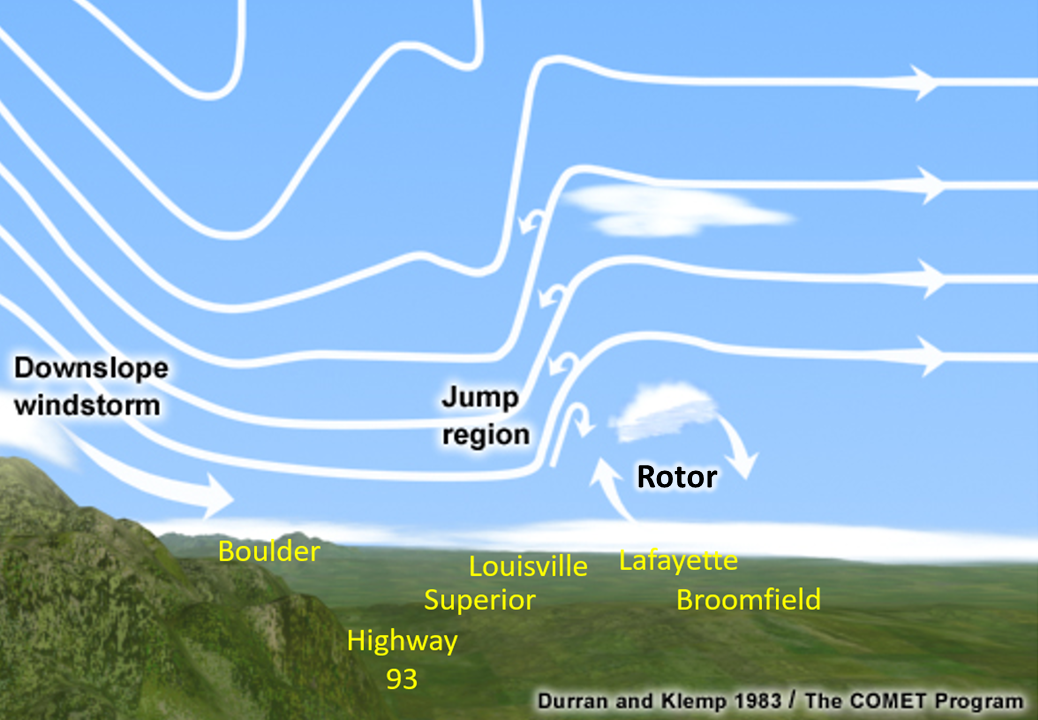 The video below from Chris Holder, shows the jump region discussed above, perfectly illustrated by the rising smoke.

“The fire started shortly after 11 am and raced quickly eastward, fed by the mountain wave induced wind gusts of 80 to 100 mph and extremely dry grasses. The downslope portion of the wind storm held the strongest winds and smoke very near the surface. Smoke then rose vertically in the hydraulic jump region of the mountain wave, indicated by the a linear and nearly stationary cap of clouds. This region of rising smoke also roughly indicates the eastward extent of the very strong west winds.”

“Time lapse video in Figure 8 (replace with images above) helps to visualize the flow in the mountain wave, with strong winds crashing to the ground from Highway 93 east toward the Davidson Mesa and Superior, before then flowing upward in vertical in the “jump” area seen in the schematic in the previous section. This view gives us a mirror-like image to the mountain wave schematic, since we’re now looking south toward the wave rather than north as in the conceptual diagram.”

Denver7 viewer Mario Gori shared this timelapse of the MOUNTAIN WAVE helping to fan the flames of the #MarshallFire. This phenomena is like waves crashing on a beach, feeding the fire like bellows! @denverchannel @NWSBoulder #cowx @ClimateCentral @WeatherGeeks pic.twitter.com/aMjVWQApat

“By early afternoon, the mountain wave was fully established and clearly visible in the smoke and cloud structure. Time lapse imagery in the video above, taken from the southwest side of the Denver metro area was shared by Mike Nelson and Mario Gori, showing the fluidity of the mountain wave.  Note the reflection shown in the strongest first wave, and then the subsequent second and even third wave on the far right of the imagery. Smoke is clearly visible as gray, while clouds are also shown on the crest of the wave where upward vertical motion was maximized above the “jump” area.”

The smoke plume from the fire is clear in the radar imagery scanned from the Denver International Airport. While the fire was most intense, reflectivity values in the yellow shade are apparent, indicating the highest cloud tops created by the smoke plume and the mountain wave.

For more information, please visit the original page with this detailed breakdown of the dynamics of this terrible fire.

About the author
Rob Bradley

Rob grew up in South Florida, where daily afternoon storms and hurricanes piqued his interest in meteorology early on. That interest was fostered by his teachers and his father, who one time brought him onto the roof of their home to watch a funnel cloud move through the Everglades several miles away. ... Load MoreYears of filmmaking and tv production in high school gradually pushed him toward broadcast meteorology at Florida State University, where he joined and eventually led the student run daily weather show. After graduating with a Bachelors of Science in Meteorology, he began his career at KESQ in Palm Springs, California before heading to KFSN in Fresno and WLOS in Asheville, North Carolina. He has covered a diverse array of extreme weather events, including haboobs and flash flooding in the desert, extreme snow in the Sierra, hurricanes, and Appalachian ice storms. He also enjoys telling stories and reporting about weather issues. Connect with Rob on Twitter