One More Day of Flood Threat for Appalachia
East Coast Heats Breaks Down with Storms
Monsoon Season Remains Active
Rain Potential from Texas into the Deep South
Area of Interest in the Atlantic; Tropical Storm Howard in the Pacific
Severe Weather and Fire Concerns Continue Across the Northwest as the Heat Breaks
All Weather News

[Image of red tide from the west coast of Florida near Sarasota from August, 2018. From Sarasota Lifestyle]

[NASA] This summer and early fall, beachgoers and residents along Florida’s central Gulf Coast endured an unpleasant and, at worst, debilitating aquatic annoyance: a dangerous red tide caused by the harmful algae Karenia brevis. Toxins released from this year’s high concentrations of the algae killed countless fish and marine mammals. As those toxins became airborne, they brought breathing difficulties to beach-goers – especially those with severe allergies and asthma.

Starting in October, people looking to avoid the hazardous effects of toxic red tides around St. Petersburg and Pinellas County have a new smartphone-based pilot information resource updated several times a day to help them know the risks before they head to the beach.

“This new 24-hour Experimental Red Tide Respiratory Forecast lets people see which beaches might be impacted by red tide, allowing them to plan their beach activities,” said Barbara Kirkpatrick, executive director of the Gulf of Mexico Coastal Ocean Observing System (GCOOS). “They can use this tool the same way they use other weather reports.”

This new forecast, updated every three hours, was developed by NOAA’s National Centers for Coastal Ocean Science in partnership with NASA, GCOOS, the Florida Fish and Wildlife Conservation Commission, and Pinellas County Environmental Management. It builds on NOAA’s Harmful Algal Bloom Forecast System and the Near Real-Time Integrated Red Tide Information System from the University of South Florida, both of which use NASA satellite data.

[People looking to avoid the hazardous effects of toxic red tides in Pinellas County, Florida, now have a smartphone-based information resource updated several times a day to help them know the risks before they head to the beach. Credits: GCOOS]

To understand the extent and evolution of fast-changing blooms around the world – a key research objective of NASA’s Earth science program – satellite observations are essential. Data from NASA’s Terra and Aqua spacecraft and the European Space Agency’s Sentinel-3 satellites were used to develop the system. These satellites provide data that guide ground sampling locations, which are fundamental to identifying the toxic organisms, and help fill in any gaps in sampling. Pinellas County conducts a daily direct counting of Karenia brevis. The county is also collecting data using a new tool called HABscope, developed by GCOOS researcher Robert Currier.

HABscope is a smartphone app that was the product of a collaboration between NASA’s Applied Sciences Program and several partner institutions. Trained water samplers collect video of water using microscopes attached to their smartphones. The videos are then uploaded to a cloud-based server and are automatically analyzed by computer software developed by GCOOS that identifies and counts the number of Karenia brevis cells in the water sample. 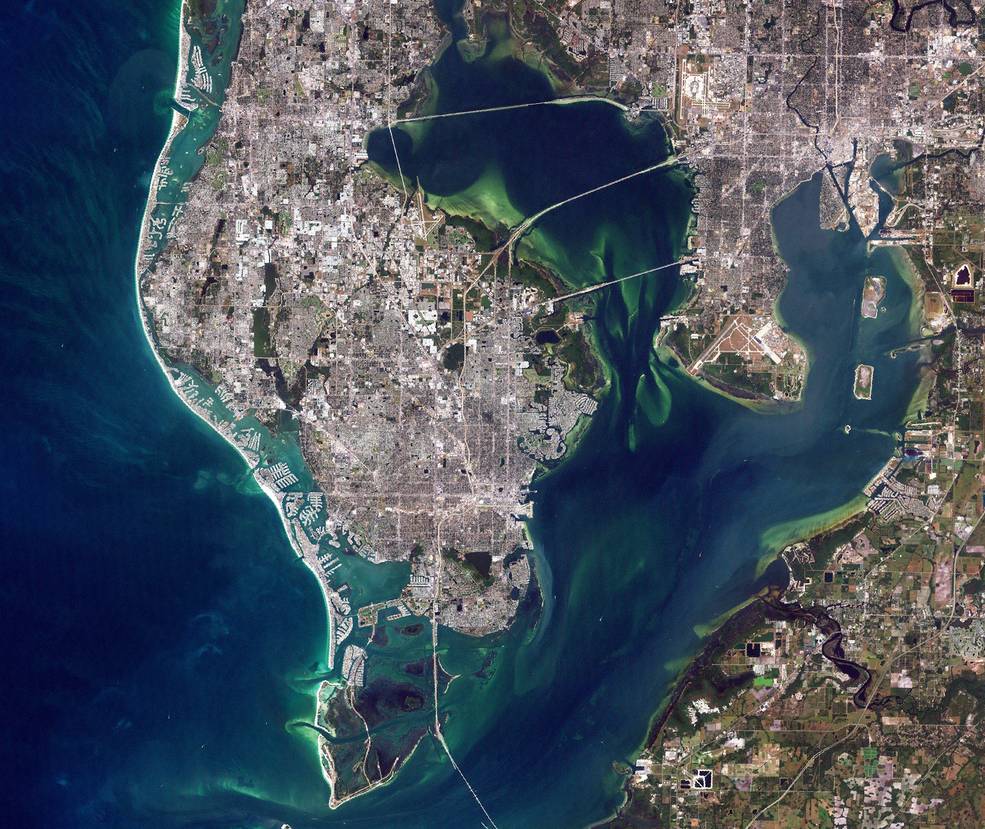 [A satellite view of Florida’s Gulf Coast around St. Petersburg that since this summer has experienced a dangerous red tide. Satellite data from NASA and the European Space Agency were used to develop the new red tide health alert system. Credits: NASA]

This experimental forecast is being tested in Pinellas County because it has rapidly developed a robust data collection system for red tide cell counts. This cell count data, combined with wind forecast information, helps verify the beach-level forecast models. Looking ahead, HABscope data may feed directly into the experimental system and extend to beaches in other counties.

“Now, thanks to the water testing conducted by Pinellas County, we’re able to refine our forecasts and offer predictions on a beach-by-beach basis,” said NOAA National Centers for Coastal Ocean Science oceanographer Richard Stumpf. “This forecast is the first step toward reducing the health and economic impacts of red tides for coastal communities. No one should get sick from a day at the beach.”