2017 Was the Third Warmest Year on Record for U.S.
Special Stories
12 Jan 2018 9:47 AM
From NOAA 2017 will be remembered as a year of extremes for the U.S. as floods, tornadoes, hurricanes, drought, fires and freezes claimed hundreds of lives and visited economic hardship upon the nation. Recovery from the ravages of three major Atlantic hurricanes making landfall in the U.S. and an extreme and ongoing wildfire season in the West is expected to continue well into the new year.

Climate by the numbers 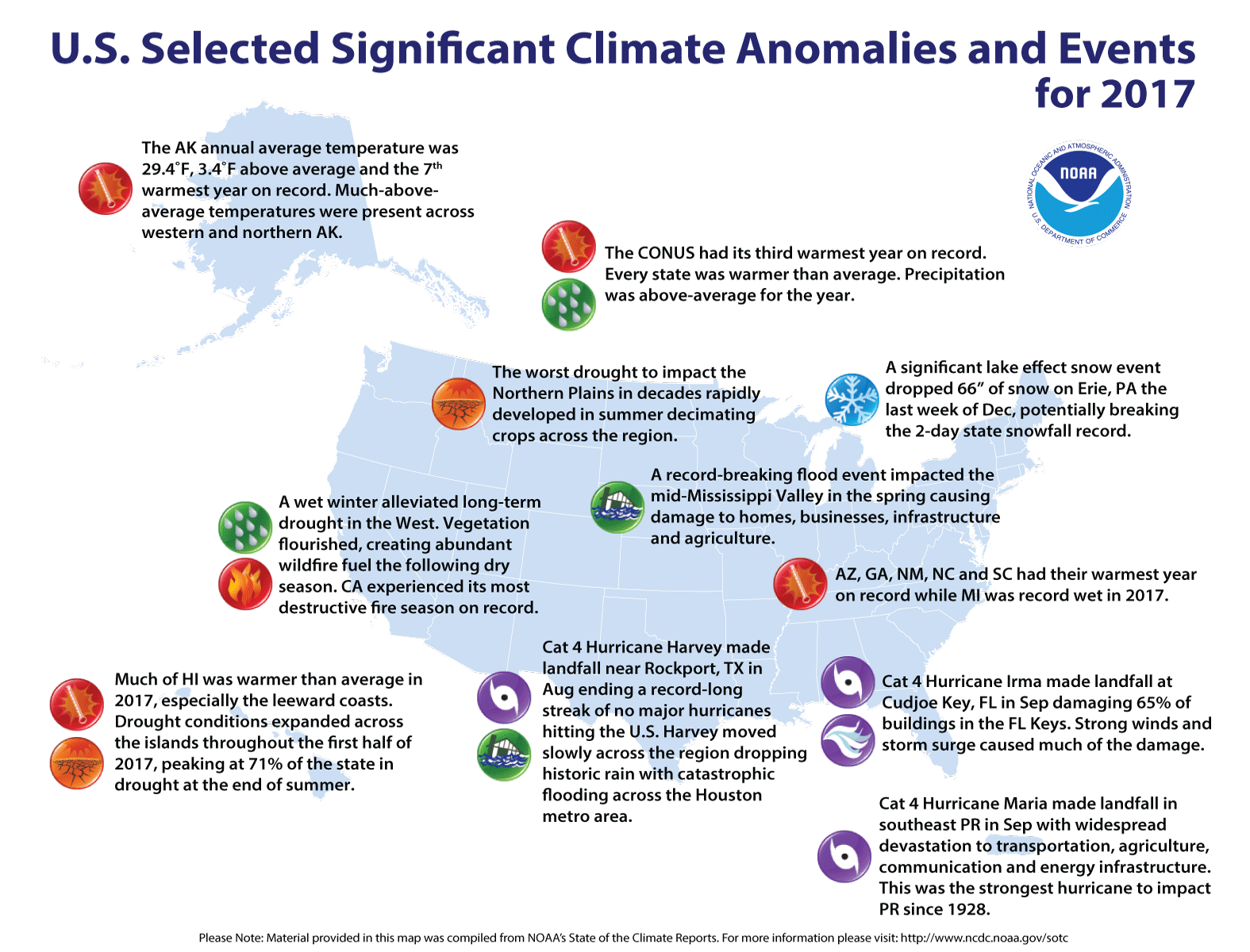 The average U.S. temperature in 2017 was 54.6 degrees F (2.6 degrees F above average), making 2017 third warmest year in 123 years of record-keeping, according to scientists from NOAA’s National Centers for Environmental Information. In fact, the five warmest years on record for the U.S. all have occurred since 2006. 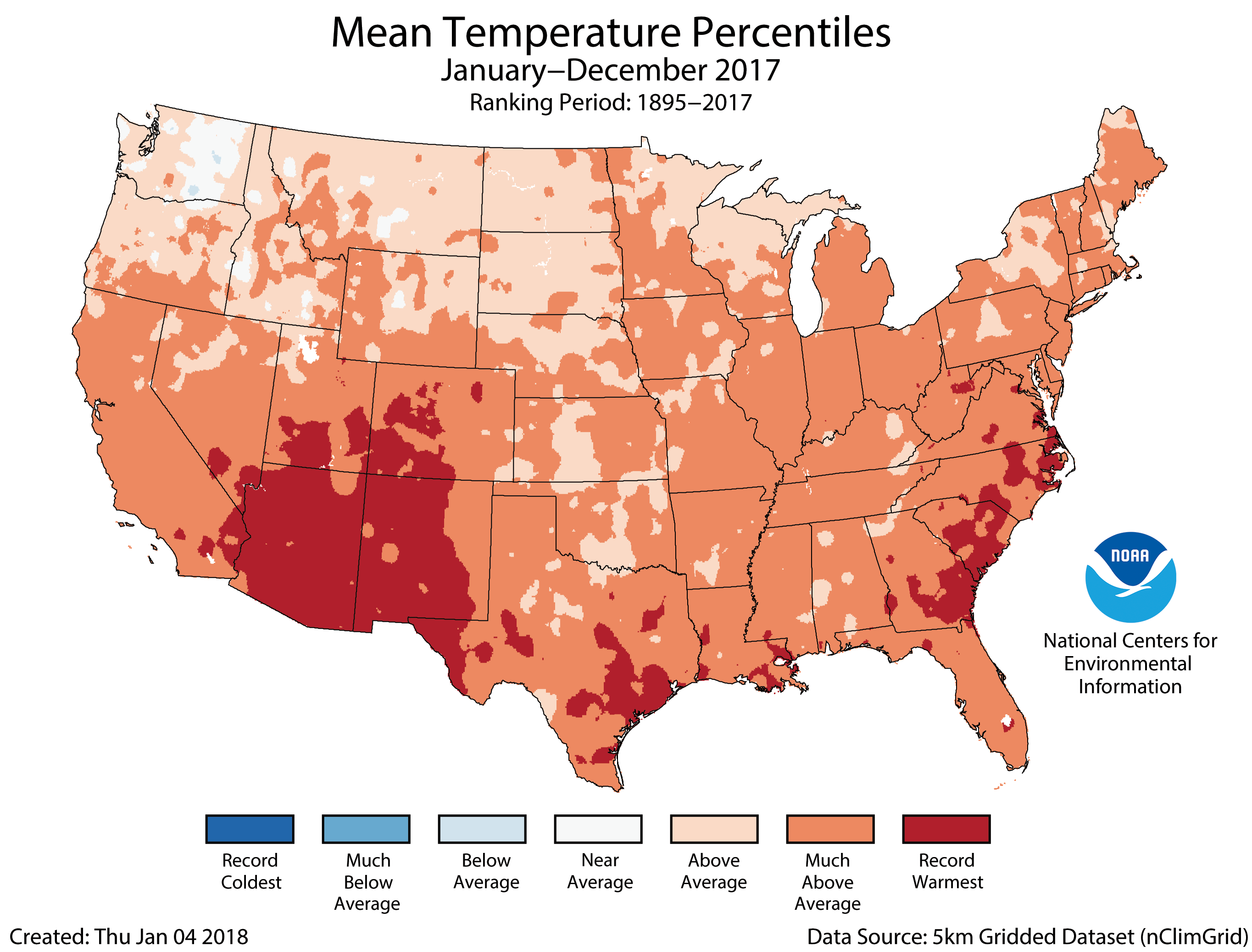 2017 was also was the 21st consecutive year that the annual average temperature exceeded the average. For the third consecutive year, every state across the contiguous U.S. and Alaska experienced above-average annual temperatures.

Precipitation for the year totaled 32.21 inches (2.27 inches above the long-term average) ranking 2017 as the 20th wettest year and the fifth consecutive year with above-average precipitation. The national drought footprint (total area) began and ended with about one quarter of the Lower 48 states in drought. The drought footprint reached a low of 4.5 percent in May, the smallest drought footprint in the 18-year period of the U.S. Drought Monitor. 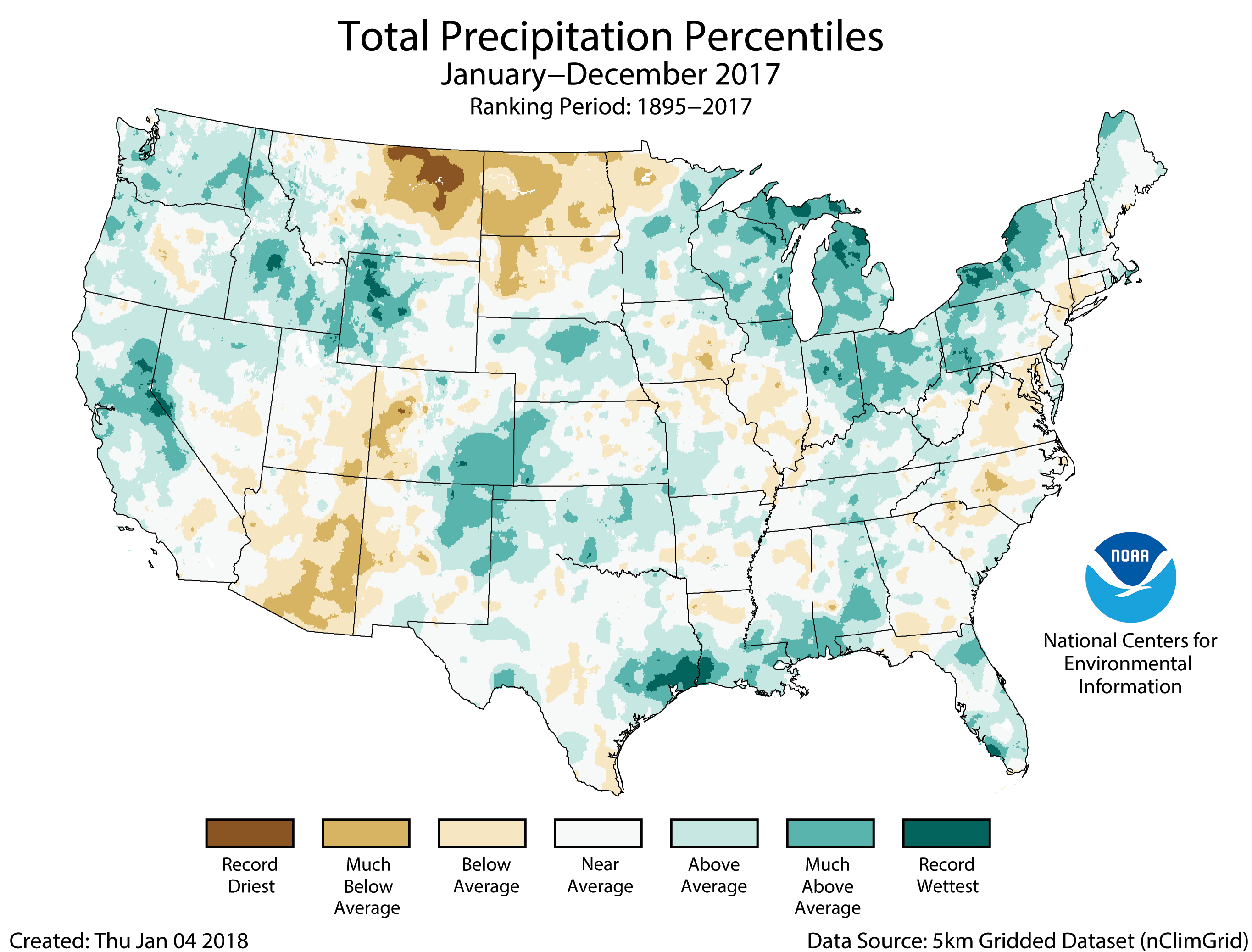 The month of December ranked near the warmest third of the record, with an average temperature across the contiguous U.S. of 34.8 degrees F, 2.1 degrees above average. Much-above-average temperatures were observed across the Southwest with record warmth in parts of California and Arizona, while near- to below-average temperatures were observed across parts of the Great Plains, Midwest and Northeast. The month ended with record and near-record cold temperatures for many locations in the East. The precipitation total for the month was 1.55 inches (0.80 of an inch below normal), making it the ninth driest December on record and the driest in nearly three decades. 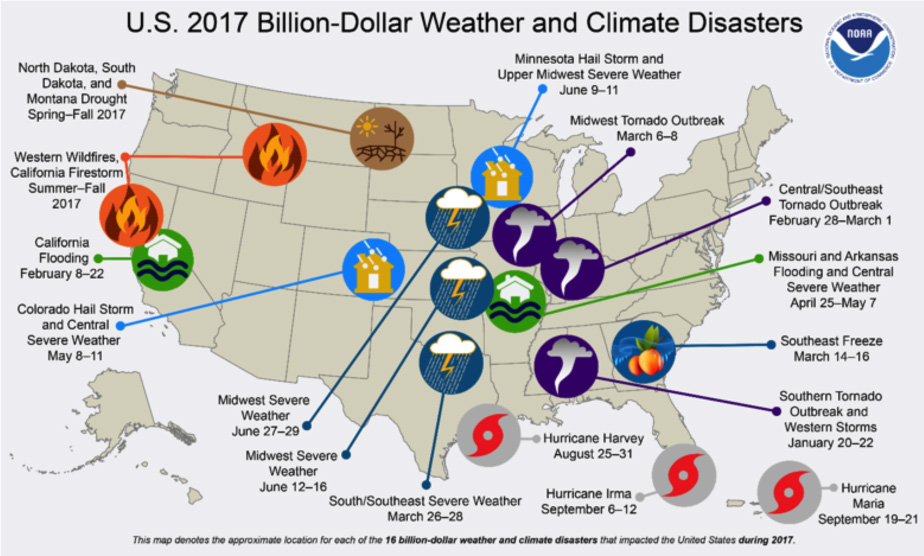 Far more tragic was the human toll. At least 362 people died and many more were injured during the course of the disasters that included:

The biggest newsmakers include the western U.S. wildfires that caused damages tallying $18 billion — triple the previous U.S. record. Losses from Hurricane Harvey exceeded $125 billion, which ranked second only to Hurricane Katrina, the costliest storm in the 38-year period of record. Hurricanes Maria and Irma had total damages of $90 billion and $50 billion, respectively. Hurricane Maria now ranks as third costliest weather and climate disaster on record for the nation, with Irma coming in close behind as fifth costliest. Since 1980, the U.S. has sustained 219 weather and climate disasters that have exceeded $1.5 trillion in overall damages to date. Edited for WeatherNation by Meteorologist Mace Michaels
All Weather News
Active Weather Returns to the Northwest
There has been a quieter streak across the Pa
3 Feb 2023 1:50 AM
Snow Returns to the Sierra This Weekend
After a period of a few dry weeks, we are gea
3 Feb 2023 1:40 AM
Heavy Rain & Severe Weather Returns to the Gulf
The active Flood Watch was just dropped for t
3 Feb 2023 1:30 AM
Clipper System & Lake Effect Bring Light Snow to the Northeast
The first round of snow have wrapped up for t
2 Feb 2023 9:50 PM
Significant Icing Event Causes Widespread Power Outages & Halts Travel Through the South
We have seen significant icing this week with
2 Feb 2023 9:40 PM
Life Threatening Cold Arrives in the Northeast Friday & Saturday
We are gearing up for some of the coldest air
2 Feb 2023 9:35 PM
Single Degree Highs Locked into the High Plains
Arctic air from Canada has been grasping much
2 Feb 2023 9:30 PM