U.S. Hit with 3 Billion-Dollar Disasters in First 3 Months of 2018
Special Stories
9 Apr 2018 9:42 AM
[Satellite image of the third nor'easter to hit the Northeast in March] From NOAA Weather-wise, 2018 started out with a bang and continues to be anything but ordinary. In just the first three months of year, the U.S. experienced three weather and climate disasters with losses exceeding $1 billion each. These included a severe storm in the Southeast and two winter storms in the central and eastern U.S. that caused the deaths of at least 34 people and had significant negative economic impacts. Let's dive deeper to see how March 2018 and the year to date fared in terms of the climate record. 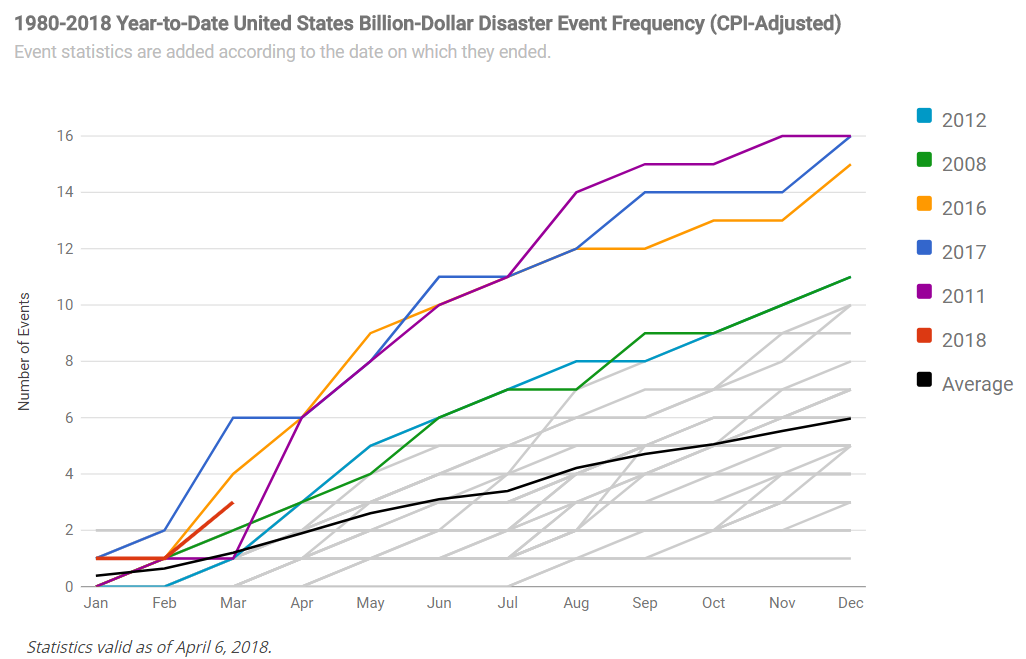 Climate by the numbers

The average March temperature across the contiguous U.S. was 42.6 degrees F, 1.1 degrees above average, and ranked near the middle of the 124-year record, according to scientists from NOAA’s National Centers for Environmental Information. The month brought below-average temperatures to parts of the East Coast, Northern High Plains and West, and above-average temperatures across the south-central U.S. and parts of New England and the Upper Midwest. 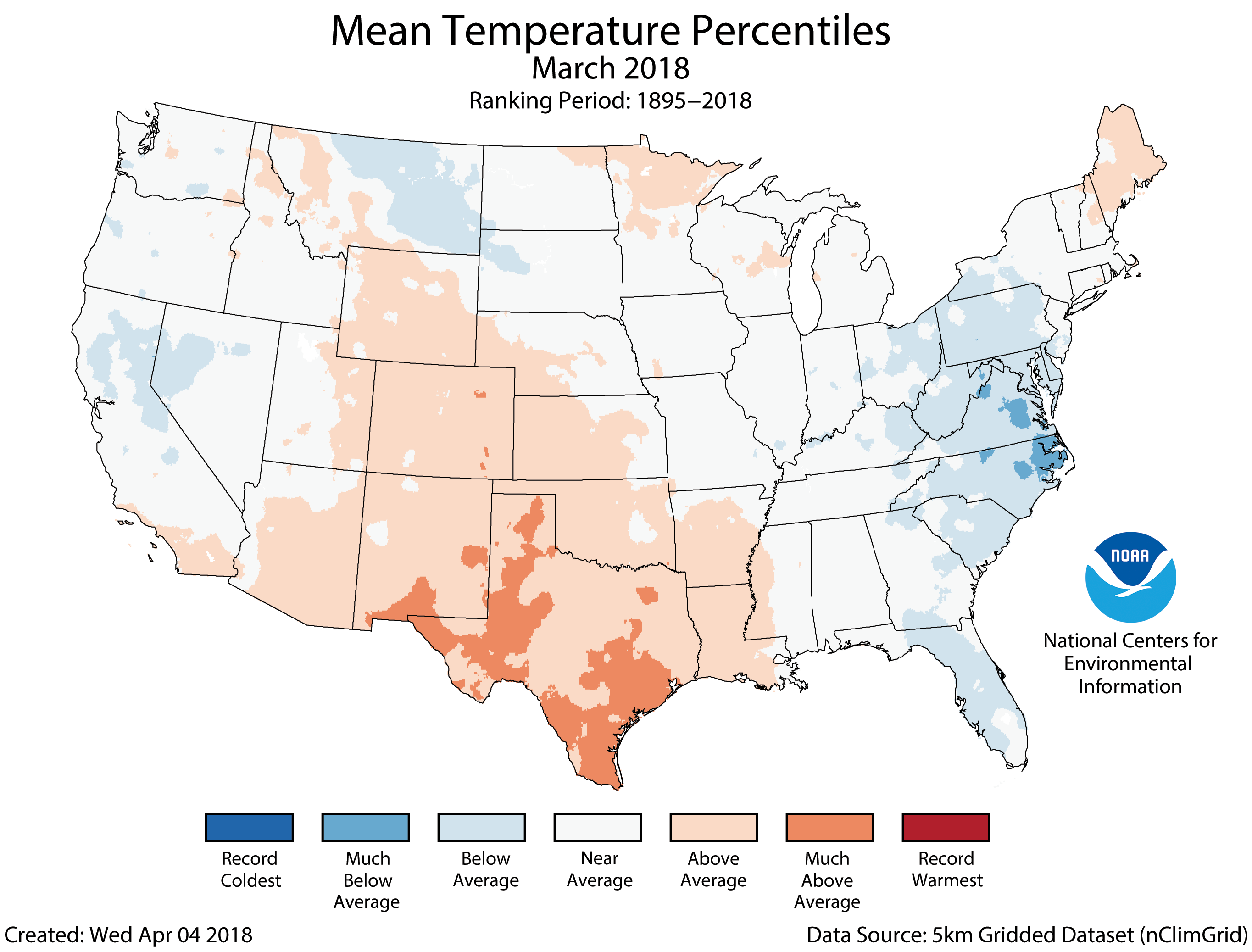 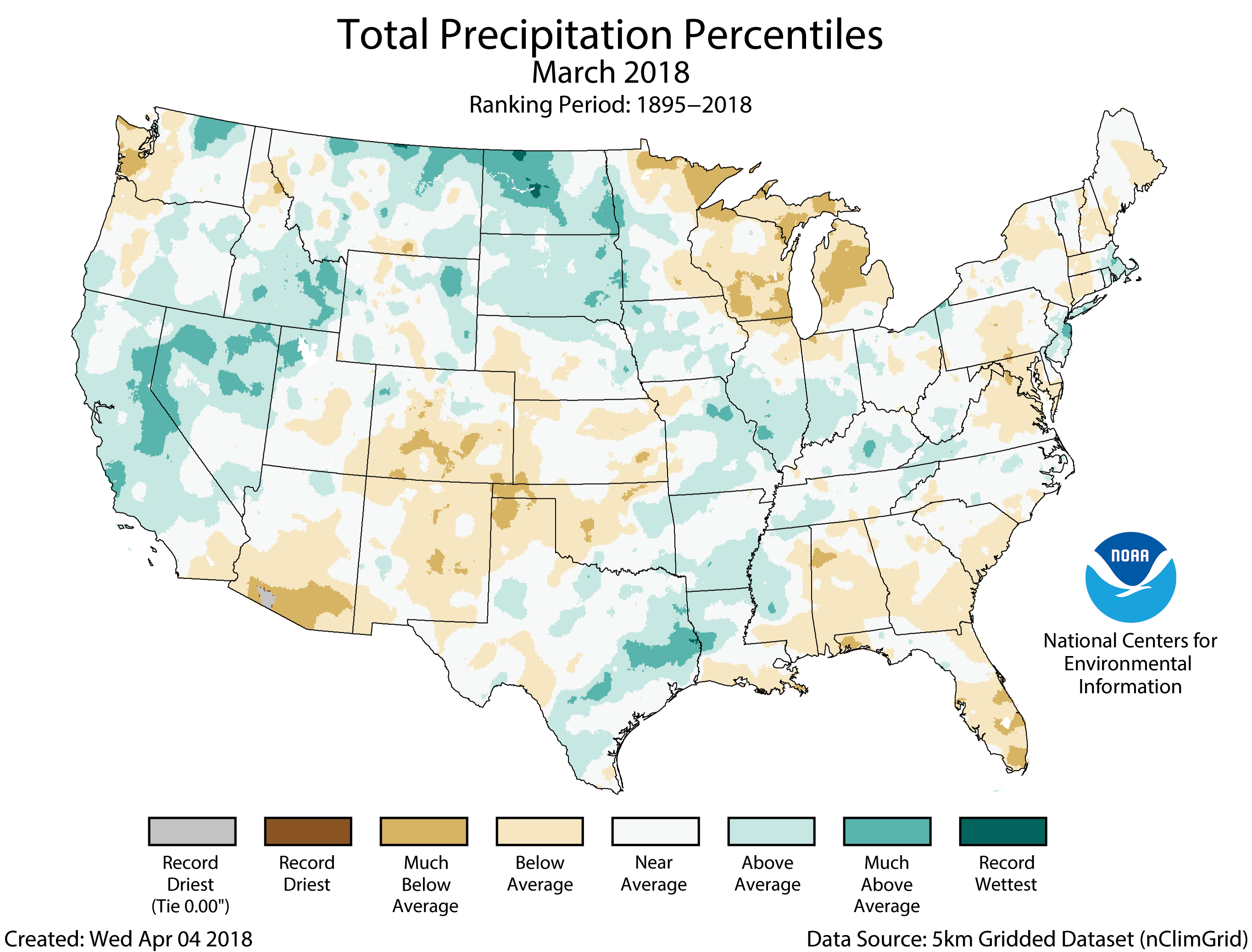 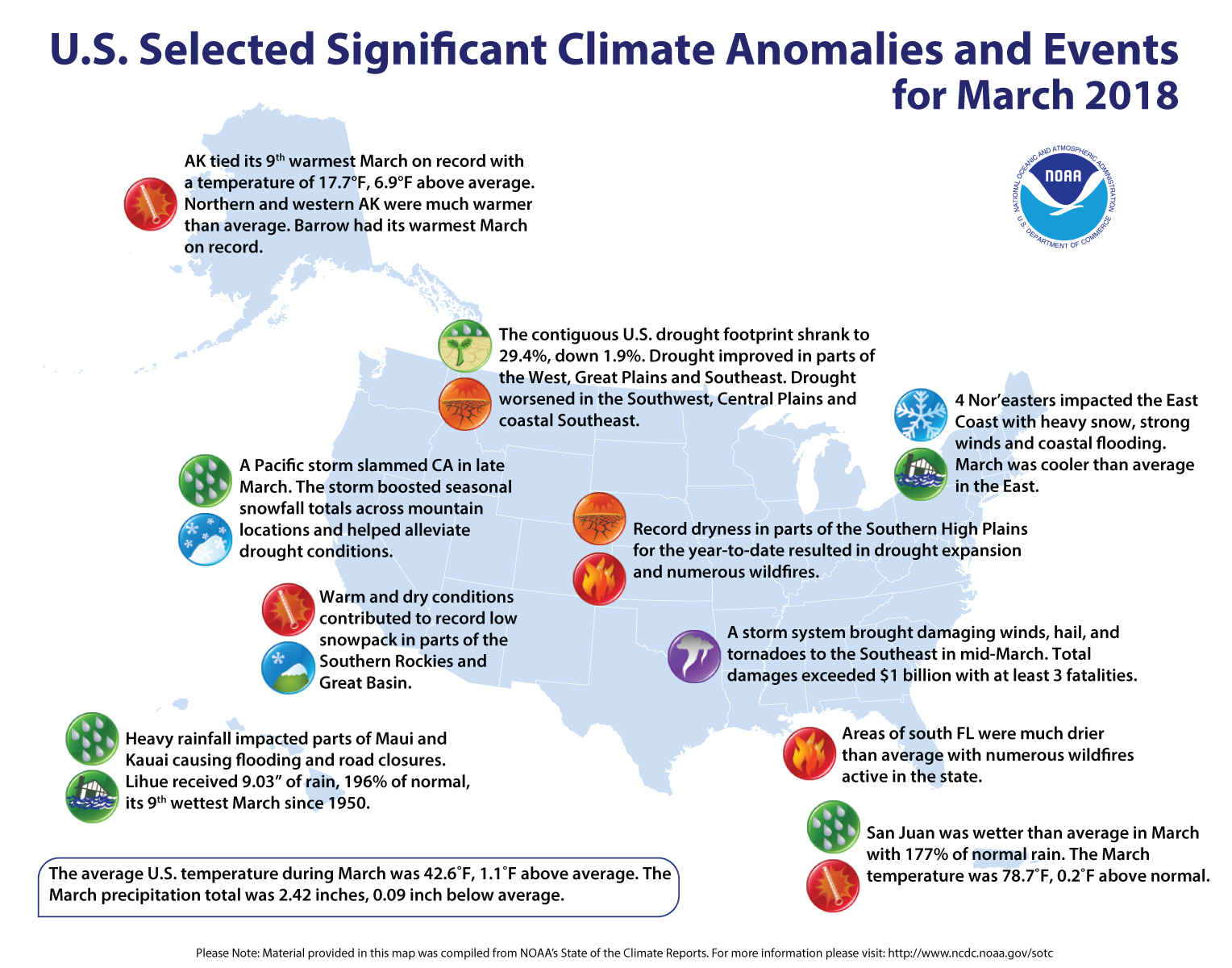 The average U.S. temperature for the year to date (January through March) was 36.8 degrees F, 1.6 degrees above average, placing it among the warmest third of the climate record. This was the coldest start of the year for the nation since 2014. Precipitation for the year to date totaled 7.13 inches, 0.17 inches below normal, which ranked near the middle of the record. 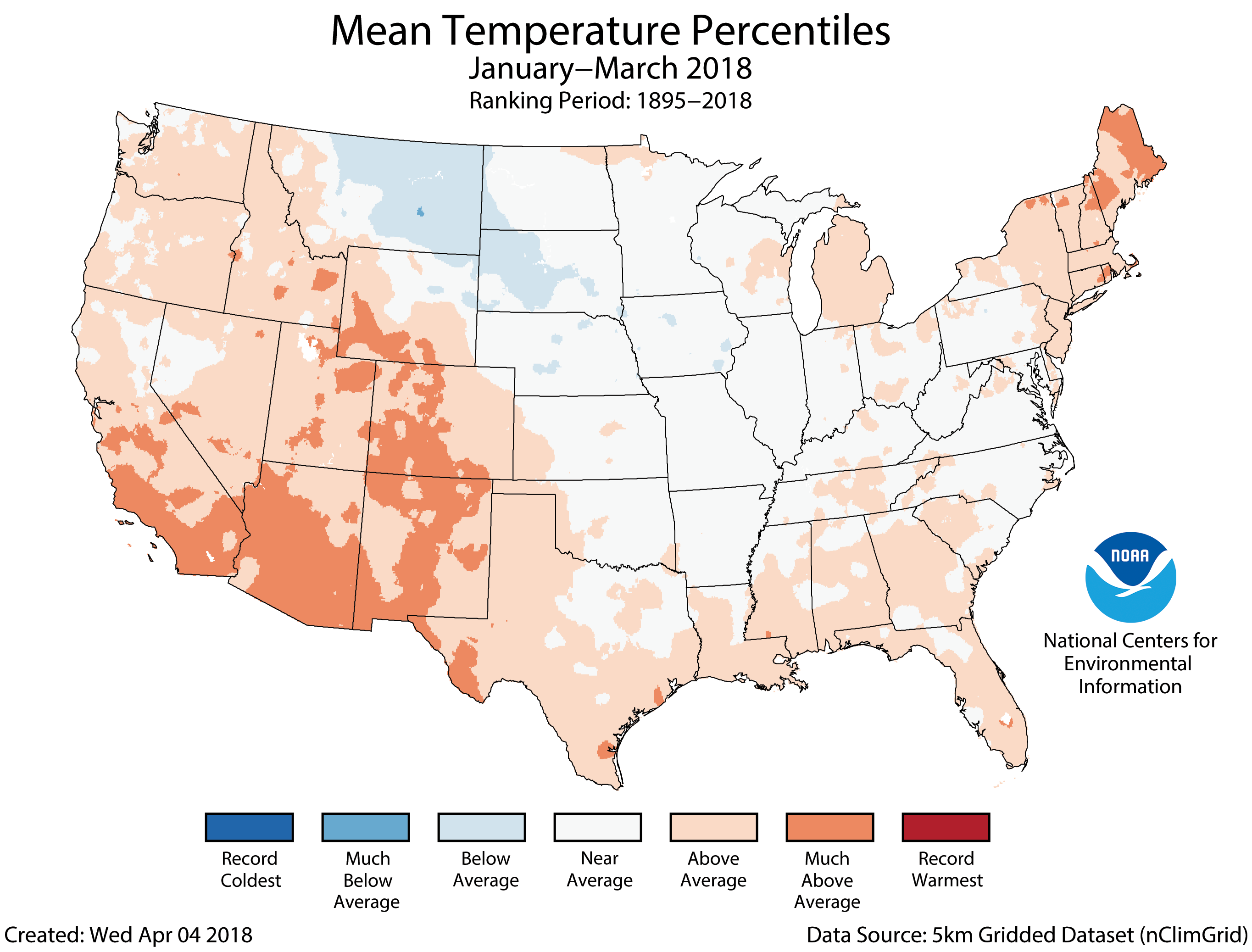 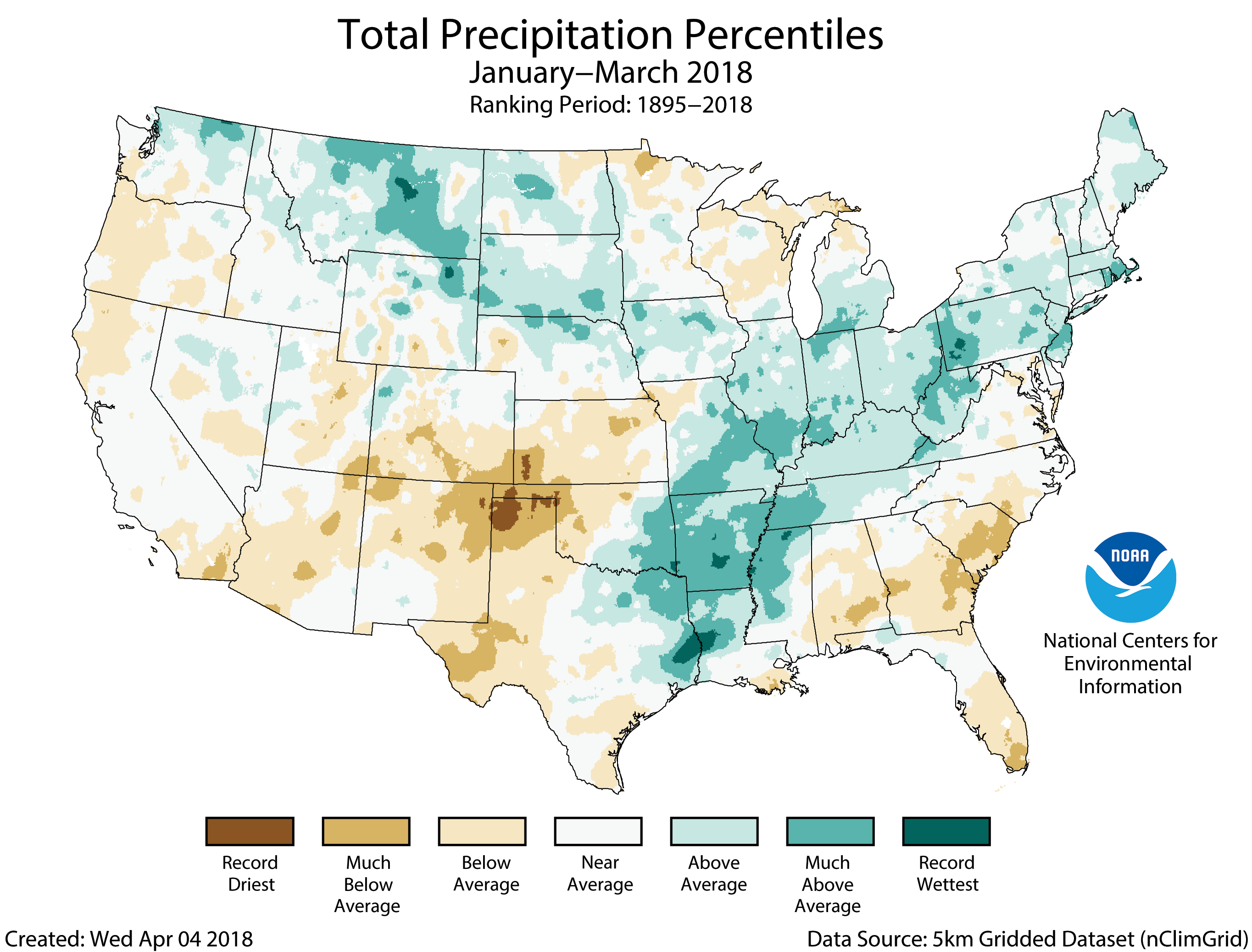 Edited for WeatherNation by Meteorologist Mace Michaels
All Weather News
Active Weather Returns to the Northwest
There has been a quieter streak across the Pa
1 Feb 2023 1:50 AM
Sub-Zero Temperatures Take Aim at the Northeast This Weekend
We have seen brutal cold through the central
1 Feb 2023 1:45 AM
Significant Icing for the Plains to the Ohio Valley
We have seen significant icing this week with
1 Feb 2023 1:40 AM
Flood Alerts Issued as Heavy Rain Returns to the Gulf this Week
GULF STATES - Another round of rainfall will
31 Jan 2023 11:25 PM
Brutal Cold Tuesday Morning Before Improvements Arrive
Arctic air from Canada has been grasping much
31 Jan 2023 3:15 PM
Winter Storm Warnings Issued Outside of LA, San Diego
The mountains of California are experiencing
30 Jan 2023 6:40 PM
Atmospheric Rivers Eradicate All of California's Extreme Drought Conditions
From December 26, 2022 to January 17, 2023 9
30 Jan 2023 10:00 AM