Pi Day– And how it Affects Your Pie

As I sat down to write this ever-so-nerdy article, I realized it’s actually my dad’s birthday. So, happy birthday Dad!

But oddly enough my dad shares this special day with some other pretty smart people. Including Albert Einstien.

Which is a perfect segway into talking about pi! Unfortunately you can’t eat this nummy number, but it can help you get the most bang for your buck next time you go for that favorite pie!

We’ll discuss that in a minute– first we have some learning to do.

Pi is a number.

If we’re rounding.
But really we often just refer to is as 3.14. And because my hands hurt after typing all of those darn numbers from memory, we’ll stick to 3.14 from here on.

But Why is Pi so Special

pi or simply “π” is the ratio of the circumference of a circle to it’s diameter.

Let me put it this way; if you multiply the diameter of a circle by 3.14 you will get the distance around that circle!

pi has been calculated out to a trillion digits and beyond. No patterns. No repeating. And by the time your kids read an article like this, we’ll know even more of those digits! 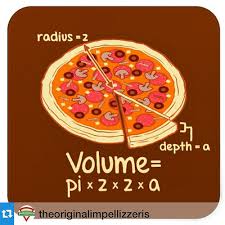 If you aren’t a super nerd, you are probably wondering what makes this so special. Well, let me put it this way…

Pi can be used to calculate circumference, area, and even the volume of a 3-d object.

That means, with a little math you can calculate just how much pizza you get if the restaurant simply gives you the diameter of the pie.

If Pizza sizes were given in area not diameter, you'd see instantly that a 7 inch is less than half the size of a 10 inch pie

So next time you laugh at us nerds, just know we’re stuffing our faces with not-so-pricey pie.

I think I’ve already crossed the line into nerddom with this article. So at this point, if you want to know more— just google pi!

Happy Pi Day to All, and to All a Good Pie!